You are here: Home1 / Culture2 / Is There a Case for Keeping Psychedelics Illegal? Ethics, Conservation,...

Is There a Case for Keeping Psychedelics Illegal? Ethics, Conservation, and Indigenous Rights

Should psychedelic plants stay illegal in order to protect them and the cultures that rely on them? 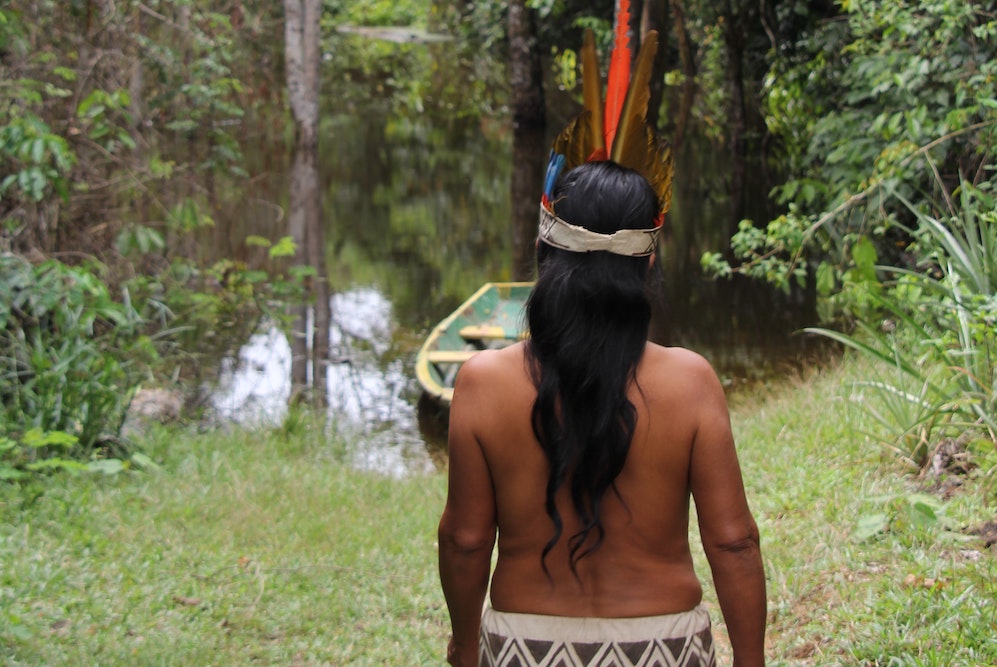 Recent data revealed that the Amazon rainforest, the world’s largest land-based carbon sink, is now producing more CO2 emissions than it sequesters. You can blame a number of industries for that, namely the breeding of livestock. Brazil’s president, Jair Bolsonaro, has made it easier than ever for industries to put profit over protection through lax regulations, allowing for razing a bit more of the world’s largest and most precious rainforest every day.

It’s not without its consequences, though. A group of Indigenous communities who live in or rely on the Amazon recently sued French supermarket chain Casino for sourcing beef from JBS—the world’s largest beef producer. It’s a Brazilian company, and, while it has made public commitments not to source from suppliers contributing to deforestation, that’s exactly what the groups say is happening. The spiraling depth of Brazil’s meat supply chain makes it difficult—but not impossible—to trace the source. A group of EU and UK retailers also jumped to call for action, pledging to blockade Brazil if Amazon-protecting policies and enforcement fails to happen swiftly and with regularity. That type of boycott could kill the Brazilian meat industry. But it’s not likely it will get that far. However, it does bring to light issues around Indigenous communities’ rights—not just to their land and sovereignty—but to the plants and medicines they’ve relied on since before time.

A similar conflict is now playing out in the decriminalization efforts of psychedelics in the U.S. Under current federal laws, most psychedelics are listed as Schedule 1 and Schedule 2 drugs, meaning they have the highest likelihood to cause addiction and pose no medical value. They’re listed alongside heroin and methamphetamines. But research at esteemed universities such as NYU and Johns Hopkins are proving otherwise. Not only do psychedelics hold value in treating a number of mental and physical conditions, but they’re also being used to treat addiction to opioids and alcohol. This has led to efforts to decriminalize the substances. Cities including Washington D.C. and Denver, Colo., have decriminalized psychedelics, making them the lowest priority for law enforcement. The state of Oregon decriminalized psychedelics last November. It also became the first state to legalize therapeutic use of psilocybin, the active ingredient in more than 100 species of psychedelic mushrooms.

But these regulatory changes inevitably mean an increase in demand for psychedelics, whether for recreational or therapeutic use. Now, a group of Indigenous communities wants psychedelic cacti, specifically peyote, removed from decriminalization efforts. In other words: they want it to remain illegal to use in order to protect it.

“This conservation effort includes regulatory and legal measures designed to ensure biocultural conservation. It is important this effort not be interrupted or diluted,” a letter from the groups said. “Individual, state or local decriminalization efforts that include peyote can be disruptive to the nation-wide strategy driven by Native American people to protect, conserve and ensure the spiritual and ecological sustainability of peyote.”

The groups site the potential to wipe out peyote cacti if there are no penalties for use. A single peyote plant (often called “buttons”) can take more than a decade to mature. This makes it particularly vulnerable to endangerment, particularly as the warming planet is impacting the Mexican region where it grows best. Farmers in the area have been forced to move north as land dries up, making the future for wild flora, like peyote, and the chaparral bushes it typically grows under, uncertain. According to the Sierra Club, the cumulative number of climate migrants from Central America and Mexico could be at nearly 4 million by 2050.

Conservation of Culture and Medicines

Preservation is a prime concern for the Indigenous Peyote Conservation Communication Committee (IPCCC), which supports keeping peyote illegal to this effect. Even despite best conservation efforts, the group fears an influx of harvesters descending on regions like Mexico’s Sierra de Catorce valley where it thrives under the cover of chapparal shrubs.

The group’s position is “not due to opposition to decriminalization efforts in general,” IPCCC stressed, “but because there is an entire conservation strategy already underway.”

Conservation is also a concern in the Amazon, where the psychedelic brew ayahuasca originates. These concerns ramped up after the fires that ravaged the Amazon in 2019. Industries encroaching on the forest pose threats, but so too does the influx of Western psychedelic seekers to the region, increasing demand for ceremonies of the DMT-rich medicine. This has forced local healers and shamans to go deeper into the forest to find the ingredients for the brew, namely the Banisteriopsis caapi vine, which is an MAO-inhibitor that contributes to the length and intensity of DMT-containing plants it’s mixed with. “Short supply of chacruna leaves, for example, has prompted increased use of alternatives, such as huambisa and toé, with unpredictable and potentially deadly effects,” notes The Guardian. “These substances are particularly dangerous in the hands of the growing number of amateur curanderos,” including in the death of tourists, including 18-year-old American Kyle Nolan. Travelers to the region also introduce diseases—not just to the people of the forests, but to the plants and animals that live there, too.

Two other areas of concern for conservationists are the procurement of 5MeO-DMT and Kambo. Both are sourced from the skin of toxin-secreting amphibians: the Incilius Alvarius, also known as the Colorado River Toad, “Bufo Alvarius”, “El Sapo/Sapito”, “Bufo”, and “Toad” for 5MeO; and the Phyllomedusa bicolor, also known as the giant monkey frog for Kambo. The secretions of toads and frogs are incredibly intense and a little goes a long way, but it can require as much as two toads for one psychedelic experience. A 2017 Viceland investigation followed toad hunters who had collected more than 500 grams of bufo toad toxins, about 5,000 doses.

Frogs and toads secrete these toxins to deter predators. This means the only way to extract the secretion is to cause the animals stress as if they’re being threatened by predators. Some are placed near fires so that their skin begins to “sweat” the poison. But more often, the animals are beaten, eventually to death, to release the chemicals. They’re left barely alive long enough to extract as much secretion as possible, and then often finished off and left for scavengers to eat.

Many practitioners claim this is being done ethically, but there are no regulatory bodies looking into Kambo or 5MeO procurement. Much like peyote harvesting, Kambo and 5MeO are often harvested by individuals, tracked and harvested much like truffle mushroom hunters in the wild.

Both Bufo toad and monkey frogs are not endangered. They’re listed as “least concern” on the  IUCN Red List of Threatened Species. But amphibians including toads and frogs are indicator species. They are among the first to react to environmental changes and play significant roles in the health of their ecosystems. Continued pressure on the species could lead to population declines and impacts on their environments. The decriminalization of psychedelics could further put them in jeopardy.

There are also ethical concerns of over-extraction of these resources, particularly those taken from animals. Do humans have the right to harm other creatures for their own personal gain? Especially when psychedelics are often being explored for personal development reasons—not as food, clothing, or shelter? And especially when synthetics and other substances that don’t involve taking a life exist?

Protecting the Past and the Future

Plant medicines like peyote also belong to long lineages of spiritual and religious cultures. Loss of access due to over-harvesting as a result of decriminalization, could threaten these rituals for Native Americans and South American tribes.

“This conservation effort includes regulatory and legal measures designed to ensure biocultural conservation. It is important this effort not be interrupted or diluted,” the IPCCC letter says. “Individual, state, or local decriminalization efforts that include peyote can be disruptive to the nation-wide strategy driven by Native American people to protect, conserve, and ensure the spiritual and ecological sustainability of peyote.”

But it’s these exact healing benefits that supporters of decriminalization say could help inspire more conservation efforts across the globe—not just for psychedelics but for all of nature and each other. It’s the mystical experiences and personal growth, often through the experience of “oneness” while under the influence of the substances, that could help lead to a better world for all.

Peyote is a “key ally in our collective struggle to awaken the masses from the fear-based slumber of disconnection from ourselves, each other, and nature,” and so “we are very eager to hear the plan to save Peyote from extinction,” Carlos Plazola, chair of the Decriminalization Nature National Board, said in a response letter to IPCCC. The board is suggesting studying ways to protect plants like peyote.

According to David Bronner, CEO of the soap company Dr. Bronner’s and advocate for safe psychedelic use says Indigenous leaders have “asked the psychedelic movement to follow their lead on conservation of peyote medicine on this continent, and not decriminalize their medicine at the state or city level,” he told Marijuana Moment.

“Cultivation of slow growing peyote is one of many long term conservation strategies that the National Council is already engaged on at a nationwide level under the American Indian Religious Freedom Act: it does not require any regulatory changes at the city or state level,” he said. “The [Native American Church] does not want a signal sent to non-native seekers that it’s OK to use peyote for healing in ceremony, which would spike demand for their slow growing medicine.”

“There are other mescaline-containing cacti like San Pedro that non-natives can use,” he added. “It’s extremely disrespectful to assume that the NAC doesn’t know what they are doing in their efforts to conserve their medicine, and instead propose that a governmental committee be formed to lead this effort, especially given the long history of broken treaties and promises by US governmental bodies.”

As more decriminalization efforts are underway, discussions on how to best preserve and protect psychedelics while also sharing their important medicine are sure to continue. Just as world leaders and corporations are increasing their efforts to support sustainability and ethical management of the world’s forests and resources for future generations, psychedelics are earning their own place in the conservation conversation.

“It’s incumbent on all of us to be respectful allies,” says Bronner, “and show deference and respect to the indigenous led preservation effort already underway.”