Are Psychedelics Putting Oregon On the Brink of a Mental Health Revolution? 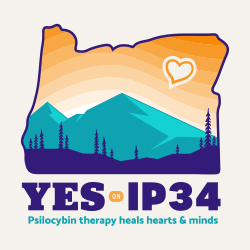 For those of us on the outside looking in, it may be hard to imagine how a state as breathtakingly beautiful and progressive as Oregon can be ranked, according to data provided by Mental Health America, as the worst state in the U.S. for the prevalence of mental illness. How is it possible that a state whose most populated and recognized city, Portland, which was the centerpiece of a comedy series, “Portlandia”, be a state facing a mental health crisis that is the complete opposite of funny? And making matters even more serious, is the fact that the state also ranks alarmingly high in its rate of drug abuse and has the second-highest rate of homelessness in the nation.

As someone who travels to the city of Portland on a yearly basis and who has experienced the stunning and majestic beauty that the state has to offer from Multnomah Falls to Cannon Beach, and not to mention an endless number of “must-try” restaurants, I have to be honest that wrapping my head around the serious epidemic the state is currently facing from a mental health perspective has been both shocking and upsetting to say the least.

However, as bad as the situation is today within the state of Oregon, a very encouraging light at the end of the tunnel has emerged in recent months in the form of IP 34.

Led by the determination and dedication of its Chief Petitioners, Tom and Sheri Eckert, who are also the founders of the Oregon Psilocybin Society, Oregon’s first Psilocybin Therapy Initiative (IP 34) recently cleared its first major hurdle in securing nearly 165,000 signatures and granting it the right to be placed on the Oregon ballot this November.

So of course, the question many people have right now is how will a “Yes” on IP 34 contribute to addressing the mental health crisis that has in many respects gripped the state of Oregon?

IP 34 aims to provide Oregonians with access to psilocybin therapy which research being conducted at some of America’s top institutions such as Johns Hopkins, UCLA, and NYU, is demonstrating the potential of being an effective treatment for individuals suffering from depression, anxiety, and addiction. Access for Oregonians to psilocybin therapy through IP 34 would become available to certain individuals within the state suffering from these debilitating illnesses and disorders through a state licensed psilocybin therapy program overseen by the Oregon Health Authority and administered only by trained and licensed facilitators.

With encouraging data coming from recent research surrounding the use of psilocybin-assisted therapies in highly controlled settings, a critical objective of IP 34 is to offer Oregonians an alternative option that focuses more on treatment and health without creating or contributing to a dependency on pills which is typically the case with conventional drugs. Moreover, there is growing evidence to support the potential of psilocybin-related treatments to be far more effective in treating certain mental illnesses and disorders which is why there is such an importance for initiatives like IP 34 to see the light of day and be given the opportunity to expand treatment options for those suffering every day from these extremely debilitating illnesses and disorders.

This week I had the privilege of communicating with Tom and Sheri Eckert to gain valuable insight into the genesis of IP 34 and how they believe it has the potential to completely revolutionize the approach to the mental health crisis in their state of Oregon.

Q&A with Tom and Sheri Eckert

1. Talk to me a little bit about the genesis of IP 34, its core objective, how and when it came together, any challenges or impediments you have encountered along the way, and more importantly the impetus behind setting out on a relatively unknown journey of trying to get it on the ballot in Oregon.

The genesis of Oregon’s Psilocybin Therapy Measure was in 2015, after we read an article in the New Yorker called the “Trip Treatment” by Michael Pollan. The article preceded his now famous book, “How to Change Your Mind,” and covered all the psychedelic research at the time as well as some emotional stories of transformation shared by the participants. As therapists ourselves, we discussed the article at length, considered the mental health crisis which we continue to experience in Oregon and made a decision. We committed ourselves to a long runway, more than 5 years, to help bring psilocybin therapy to as many people as possible, while retaining the safety and practice standards that make the research so successful.

2. The IP 34 initiative collected nearly 165,000 signatures which is impressive to say the least. This is undoubtedly something that doesn’t just happen with the snap of a couple of fingers, so what did it take from an outreach and awareness perspective to collect the signatures needed to get IP 34 on the ballot?

It took a lot of focus, effort, and creativity. We used social media, text circles, and mobilized networks across the state to get everyone involved. We have an exceptional campaign team that basically did the impossible – they completed the last leg of a massive signature canvas without being able to canvas for signatures in any traditional way. And we should also recognize the tens of thousands of Oregonians from every corner of the state that made an extra effort to get their petitions to us through the mail.

3. The number of Americans suffering from some form of mental illness or disorder such as depression and anxiety continues to increase at a rather alarming rate and particularly, as the COVID-19 pandemic rages on and grips our country. With that in mind, how important do you believe it is for the future of mental health treatment and therapies to explore and tap into alternative options such as those related to psychedelics like psilocybin therapy?

In light of Oregon’s mental health crisis and the national health crisis unfolding during these trying times, I believe it’s important to create new options. Psilocybin assisted therapy can help. This approach will bring a new tool for mental health and wellness into the field of care, and we need this because our current treatment options aren’t working for enough people. For some, psilocybin therapy might even eliminate the need for daily dosing of psych meds, and that’s good news, because the goal is to heal, not to prescribe more pills.

4. For those out there, particularly in your state of Oregon, who may not be too familiar with psilocybin therapy and its potential to be an effective treatment for depression, anxiety and addiction, how would you explain to them its capabilities of delivering a profoundly more effective treatment for these specific illnesses and disorders versus some of the more “conventional” pharma-based drugs and treatments that have been used for the better part of the last several decades? And perhaps more importantly, how does psilocybin therapy have the potential to help improve the quality of life for Oregonians from a mental health perspective?

The first thing to recognize is that psilocybin therapy is experiential. Psilocybin, when taken in a controlled and affirming environment with a trained facilitator, can occasion a profound experience that, with effective integration afterwards, can trigger real healing. The psilocybin experience brings about a remarkably flexible state of awareness in which epiphanies and emotional breakthroughs can arise more easily. So you end up participating deeply – because it’s your own personal experience. The outcomes achieved come with a sense of real agency and empowerment, which is very different from taking pills to tamp down symptoms. I think the immersive experiential quality is why psilocybin therapy can address a whole spectrum of mental health issues and improve mental wellness more generally. It’s because the healing is coming from within you.

5.  Is there anything else you would like to share or add about IP 34 and/or this renaissance in   the medicinal psychedelic space we are beginning to see unfold before our eyes?

Yes. The campaign is working diligently to integrate psilocybin therapy into our culture on solid footing. To win on November 3rd, we need all the help we can get. Whether you live in Oregon or elsewhere, we ask you to please consider donating to the campaign at www.yesonip34.org.

As we move closer to election day in November, I will continue to check-in with Tom and Sheri on the progress of IP 34. In the meantime, I would like to echo Sheri’s sentiments with encouraging anyone who is able to contribute to the initiative by donating to the campaign at the web address found above.