A Servant of the Mushroom Kingdom 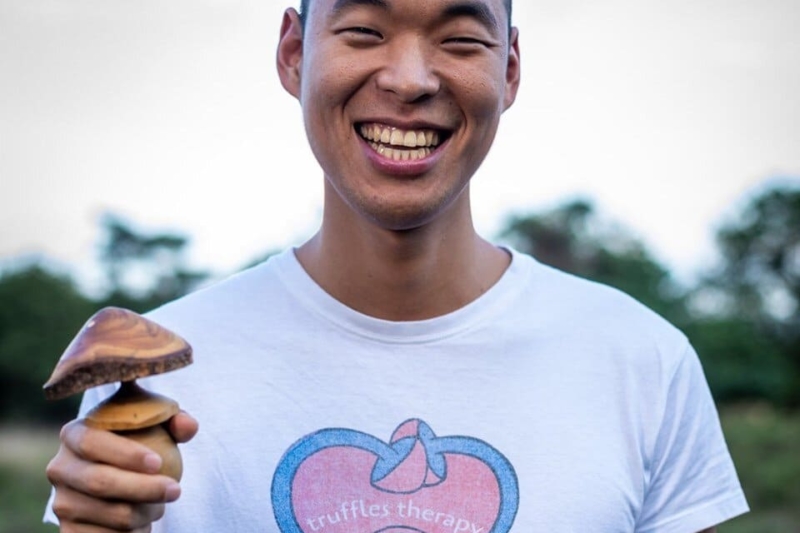 The debut commercial featuring Nike’s famous slogan “Just Do It” starred Walt Stack, an 80-year-old marathon runner in San Francisco who ran 17 miles every morning. “People ask me how I keep my teeth from chattering in the wintertime,” Stack says, smirking as he trots shirtless across the Golden Gate Bridge. “I leave them in my locker.”

“Just Do It” appears in white letters on a black screen. The year was 1988.

Soon after, on the other side of the continent, the boy now known online as Chi Psilocybin was born in New York City to a Japanese mother and a Chinese father.

The city of San Francisco would also be the setting for an important debut in Chi’s life. Meanwhile, from the beginning, the Just Do It mentality applied to Chi.

“I’ve always been an entrepreneur. I bought and sold stuff, and my sister and I went around the neighborhood offering to shovel snow or pick up poop,” said Chi. “From a young age I was driven and opportunistic.”

Chi was an excellent student, but had difficulty fitting in among his peers in New York as he was one of only two Asian-American kids in a class of three hundred. Feelings of isolation continued in the dawn of his teen years when his family moved to Scottsdale, Arizona. Chi found himself one of only fifteen or so Asian Americans among 1900 students. “My skin color and slanted eyes made me an easy target for bullies.”

And there was tension at home. The first recorded China-Japanese conflict was the Battle of Baekgang in 663 CE and over thirteen hundred years later the ancestral war continued to play out between Chi’s parents as they fought to inculcate him and his sister with their own respective perceptions and prejudices. “As the marriage unfolded these cultural and educational differences grew. The whole family dynamic was a mixture of complex emotions that I am still processing today.”

“Poker was an addiction and an escape,” Chi explains.

In 2014, Chi answered the question, “What’s it like to earn a living through poker?” on the website Quora: “In high school, I wanted to be a professional poker player…. I played lots of poker — online, in casinos, and in backrooms — and won and lost my fair share. Overall, I won lots of money. I was considered one of the best young poker players in Arizona by some. Playing poker for a living is probably the loneliest, most depressing, and purposeless way to live a life.”

Although he participated in the DARE (Drug Abuse Resistance Education) program in elementary school, Chi developed a marijuana habit in his late high school years. “I spent a few years smoking all day almost every day, and had a few relapses over the years, which would usually last a couple months. I used marijuana to escape from and numb difficult feelings. Needless to say, it didn’t cure my emotional wounds, and I often fell into deep holes of depression.”

Chi went to his first Vipassana meditation course when he was 21 years old, describing it as “mind blowing” and “life changing.” He was converted. Chi went to Burma a couple of times to practice in a strict forest monastery, planning to become a monk. He took temporary ordination both times to test out the monk’s life, but over time it became clear to Chi that he could never make it as a monk.

“At the beginning teachers might make a young monk meditate for a year just to see if he can take the silence and boredom. And then, if the novice makes it through that, the teachers make him work for a few years, so it’s a completely different mindset from our normal sense of ‘achieving’ anything,” Chi told the Psychedelic Times last year. “But I did shed a lot of layers, and of course meditation was — and still is — a beautiful part of my life.”

In the summer of 2016 Chi moved to San Francisco, a decision that tipped the first domino in a series of events that would dramatically change his life.

“I went there to work on a little startup that I founded called Home Baked which was supposed to be a platform to connect people who made baked goods at home with those who wanted to order these snacks on an app,” Chi recalls. “I won a startup competition but the idea fizzled out and I fell back into playing poker to pay back tens of thousands in debt. Within a few months, I had paid it all back and had some extra money lying around but I was depressed again.”

One day in early 2017 Chi walked into a psychedelic-themed shop in San Francisco called Love on Haight and asked the girl behind the counter where he could get some LSD. “Really naively,” he says. “I didn’t know anything about psychedelics and why there was so much stigma and fear around them.” The clerk was shocked at his nonchalant question, but pointed out someone who might be able to help. “Within thirty minutes I was on a side street buying LSD from this scraggly guy I had just met.”

Chi took the five tabs of acid back to his room and let it sit there for a couple of weeks. One night, bored and restless, he took all the LSD at once.

When asked where he got the courage, Chi demurs. “I don’t know if it was courage as much as it was ignorance, stupidity and lack of preparation and understanding. I clearly underestimated the effects. That experience really blew my mind open to the power of psychedelics, for which I am forever grateful.”

“After that journey, I thought, I can never play poker again. I made a final trip to the casino, cashed in all my chips, and decided that I needed to go on another adventure traveling.”

A few weeks later Chi had his first experience with magic mushrooms and the rest, you could say, is chemistry.

The psilocybin spoke to him, inculcating his being with purpose, direction and the promise of greater meaning. “I remember feeling more confident, lighter, and full of joy,” Chi wrote in a LinkedIn post earlier this year. “Mushrooms felt gentle, warm, and natural. I laughed a lot, which I hadn’t done in years.”

Chi describes every psychedelic episode as a “journey.” But perhaps the most profound journey he would take occurred in 2018 when he visited Thailand. That’s where Chi met Leti, his future life partner and cofounder of Truffles Therapy, the psilocybin retreat venture that has become his life’s work.

A yoga and meditation enthusiast, Leti had left a corporate job in Paris to travel to India and Southeast Asia seeking wisdom from teachers and spiritual masters.

Leti had her first psilocybin journey in Thailand and, like Chi’s first journey, the experience was sublime and transcendent. “I felt that I had discovered a miracle,” Leti reported to Shrink Rap Radio last year. “The more journeys I have and the more people I guide through their own experiences, the more my heart opens to the beautiful and sad mystery of life.”

The charismatic Chi and his lovely French girlfriend soon moved to the Netherlands where “magic truffles” are legal. Mushrooms that contain psilocybin were banned by Dutch authorities in 2008 after an ambassador’s daughter jumped from a bridge in Amsterdam while high on multiple substances, including alcohol. The prohibition doesn’t apply to the truffle, the part of the fungi that grows beneath the soil. So, ironically, magic truffles are legal while magic mushrooms, though still widely available, have gone underground.

Chi and Leti started organizing psilocybin retreats full-time. They followed their hearts and the mushroom’s vision. They didn’t apprentice on other retreats (although their time participating in various non-psychedelic retreats inspired them). They didn’t partner with any existing Dutch organizations. They didn’t ask permission.

Since August of 2018 Truffles Therapy has hosted several hundred “journeyers” from all over the world. Before COVID, retreats were fully booked months in advance. They continue to receive hundreds of messages and requests for information. The growth of Truffles Therapy retreats coincided with and perhaps benefitted from a renaissance in psychedelic research.

Print and television media all over the world — in the areas of science, medicine, investment and popular culture — have been overflowing with stories about the potentially revolutionary benefits of psychedelics.

Chi Psilocybin, because of his role in the industry and his effective use of social media, has become an influencer and a pioneer in the emerging psychedelic space.

Chi considers himself a beginner on the hard science of mushrooms, but he appreciates the wisdom he has gained working directly with hundreds of people. “Everyday I support people in their preparation and integration processes. I listen to people’s experiences. I have learned to spot patterns of thinking and behavior. It’s been an intense and humbling initiation into the mushroom’s infinite wisdom.”

Chi believes the message of magic mushrooms needs to get out to as many people as possible. “The world needs more people with money, resources, and political influence to speak out and do what’s best for their families, their communities, and our species. I’m proud of all the leaders, advocates, and researchers who are showing up and taking risks in this fragile space. My job is to connect people behind the scenes, encourage heart-centered investors and entrepreneurs to work together, and ensure the all-important decriminalization movements are moving forward.”

When it comes to a person’s first experience with magic mushrooms, Chi has changed his attitude. “I used to think everybody should take high doses and face the consequences whatever they might be. Now I advocate a more conservative, low-risk approach and recommend microdosing or smaller doses to start. This way, people feel more prepared for what might come up during their bigger journeys, which can be shocking for those who have not spent much time looking within. Slow, steady, and gradual is the safest style.”

When asked about the future, there’s no hesitation in Chi’s answer. “Oh, this is my life now. So I don’t see an end. It’s only growing. An endless stream of people are hearing about the benefits of mushrooms and seeking out the medicine. They need support before, during, and after their journeys — people need to talk with a friend and feel like someone cares for them. Also, many entrepreneurs and investors are starting innovative businesses. I do my best to provide support to everyone who asks, so we can cultivate a thriving mycelial ecosystem and make sure everyone has safe and healing journeys. I feel like I belong to the Mushroom Kingdom now.”