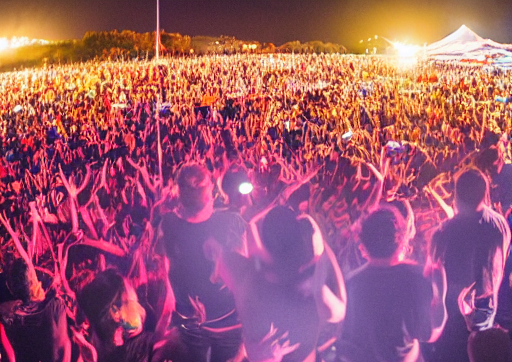 It was a wild weekend for electronic dance music (EDM) fans on Twitter. The drama started on Friday morning when DJ and producer Getter (Tanner Petulla) came at fellow DJ and producer Excision (Jeff Abel) in an epic multi-tweet rant. The beef centered on Getter’s claim that Excision had lifted the basis for a new track Titans from longtime collaborator Space Laces (Ian Slider). This accusation kicked off a two-day back and forth between Getter and Excision which devolved into a barrage of memes and side conversations about top tier DJs buying or stealing tracks from lesser known producers in a practice commonly known as “ghost producing.”

The dust-up began when Getter quote tweeted a post by Excision featuring a video from last week’s Bass Canyon festival with the comment, “dam u still ripping off space laces man???? that shits sad”

Getter spent the rest of Friday afternoon doubling down on his claims and calling out the EDM industry for elevating celebrity DJs and underpaying or not giving credit to ghost producers who innovate new sounds and drive the genre forward. Getter claimed that he was just sticking up for his friend Space Laces, who is credited as featured artist or co-producer on many previous Excision tracks.

To make his point, Getter posted this side-by-side video comparing Excision’s Titans with an unreleased or little-known track from Space Laces entitled Vaultage 003:

The community consensus was that these two tracks were indeed extremely similar, with some calling it the same exact song.

The fact that Getter claimed to be sticking up for a friend led to much speculation that ghost producers are unable to speak out about not being credited on hit tracks from top tier DJs because of exploitative NDAs and/or the fear that causing friction will cost them future gigs. The comments and replies to this accusation ran the gamut from “who cares, it happens all the time” to “bro, if you knew what went on behind the scenes in EDM you would be shocked.”

Excision eventually responded to defend himself, claiming that Space Laces had been fully credited on all their collaborations, and that the track Titans was a collaboration with DJ and producer Wooli.

Titans, the song in question, is a collab between Wooli and I, the title track for our EP Titans, entirely made in my studio. Our inspiration for this track was Mirror, my collab with Dion from 2016. Both Titans and Mirror are 128bpm house tracks that go half time. 4/6

Excision then wrapped up his multi-thread tweet by posting a video of himself in the studio doing a “deep voice” take down of Getter in which he grumbles, “I heard you want attention on Twitter. Maybe Getter your facts straight before you talk shit. Now go back under that bridge you crawled out from.” Here is a re-post of Excision’s deep voice clap-back video from @fl0wbabyfl0w.

UPDATE: Excision responded and told getter to go crawl back under the bridge he came out of and to getter his fact straight with a whole book of tweets. pic.twitter.com/TjxcCpfpyM

The reason I am linking to a re-post of the video is because Excision was dragged so hard for posting the video that it quickly became a meme template and he was forced to delete it 24-hours later to much shock and dismay. The community consensus on this video is that is was perhaps the most cringe thing they had ever seen, with some comparing Excision’s style to Limp Bizkit front man Fred Durst.

The entire ordeal was perhaps best summed up in this series of Girl Explaining meme tweets from @groovygoddesz.

OK SO YOU KNOW EXCISION RIGHT? HE TWEETED A VIDEO OF BASS CANYON WITH A SONG BY HIM AND WOOLI AND THEN GETTER QUOTE TWEETED AND SAID THAT HES RIPPING OFF SPACE LACES AND ITS A KNOCK OFF OF AN UNRELEASED TRACK BUT THEN EXCISION RESPONDED AND TOLD HIM TO GET FUCKED BC SPACE LACES- pic.twitter.com/uzW71X5ZbV

NOW DJS ARE SAMPLING THIS EXCISION RESPONSE VIDEO WHERE HES DRESSED UP LIKE A GUY IN A 2004 MONSTER ENERGY ADVERTISEMENT TALKING IN A SCREAMO GREMLIN VOICE TELLING GETTER TO CRAWL BACK UNDER THE BRIDGE HE CAME FROM AND TO GETTER HIS FACTS STRAIGHT AND ITS ACTUALLY SO CRINGE BUT- pic.twitter.com/vPbNr7Cu1c

Here is a particularly fly remix of Excision’s deep voice video from from @Elymariah13 featuring The Whisper Song from the Ying Yang Twins:

since no one else did it, i guess i will 😂 pic.twitter.com/ustdN57CAo

You can find many more creative remixes of this video by searching “Excision video” on Twitter.

The Twitter drama played out for nearly two days before Space Laces finally broke his silence to bring the conflict to a close. In a brief statement Space Laces said, “for the record i don't do any ghost producing, and i don’t have any interest in ruining anyone's career. all the songs i’ve worked on with excision i’m a credited artist.”

However, the post goes on to say that Space Laces is frustrated by people in the scene trying to replicate his sound, and at times it can be flattering but that other times it feels like he is being “disregarded or taken advantage of.” Instead of denying that there is no friction between him and Excision, he instead says, “anything between me and jeff i’d rather handle personally and not in public.” This comment has led to even more speculation that Space Laces does not feel free to make public comments about this, either because of a previous NDA with Excision or an unwillingness to rock the boat for fear of being blackballed from future events.

Although this beef seems to have simmered down for now, it does highlight the fact that the stakes are extremely high for top tier DJs in the EDM scene. It is unknown how much Excision makes for playing a set at a huge festival like Bass Canyon, but it is not uncommon for top tier DJs to earn anywhere from $10,000 to $100,000 a show, with some performers netting a million dollars or more for a single set. Contrast that with the fact that a ghost producer would be lucky to get $1000 for a track, maybe a few thousand dollars if they are in high demand. The pay gap between celebrity DJs and their collaborators and track producers is off the charts.

All of this goes to show how important reputation is for an EDM DJ to survive. In a genre where most producers are creating very similar music from the same collection of dubstep sounds available on open source or commercial sample packs, it is extremely hard to break through and innovate with new and fresh sounds. Space Laces is widely respected in the EDM scene for having a uniquely identifiable sound that “goes hard,” with fans proclaiming that he is the undisputed GOAT. It is unknown if Getter’s tirade or the cringe clap-back video will do any damage to Excision’s reputation, but Getter and others have implied that there is even more dirty laundry to be aired, and the scene will have some reckoning to deal with in the future.

This behind-the-scenes heat is exploding as the EDM community still lives under a banner of PLUR —peace, love, unity, and respect— a creed which was tested as tweets like this continuously rolled through the EDM topic feed:

You actually bought into that plur shit 🤣

Sitting on the sidelines of the Getter/Excision beef was DJ and producer Wooli, Excision’s collaborator on the Titans track. Wooli spoke up in the middle of this beef to try and clear Excision’s name, with a tweet explaining how the Titans track was made:

Getting tagged in some wild things today. Just wanna say that all of the @Excision x Wooli songs have been made together either in his studio in Canada or over zoom and usually always ends up with me trying to convince him Ableton > FL Studio even tho he makes dope sounds in FL.

The big takeaway from all of this? Yes, Excision produces all of his music in FL Studio. Deal with it.

An Inside Look at the Lawsuit that could “Legalize Psychedelics in Canada...
Scroll to top