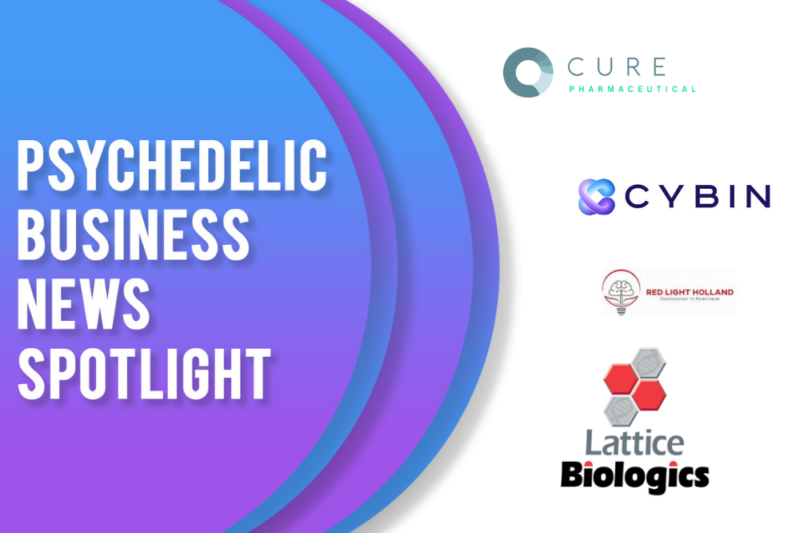 All the latest psychedelic business news highlights from this past week.

This week in psychedelic business news, oral film technology expands to LSD and other psychedelics, novel psychedelic molecules move into investigational studies, and a biologics company overhauls its business strategy to focus on the emerging world of psychedelics.

Cure Pharmaceuticals, owners of the CBD company Sera Labs, announced plans to use its oral film technology to deliver LSD and other psychedelic substances to treat mental health disorders. The company’s dissolving thin film platform Curefilm is currently being used to deliver CBD and other cannabis compounds.

Cure obtained a license from the U.S. Food and Drug Administration (FDA) to develop treatments using Schedule 1 substances, including LSD, psilocybin, and MDMA. The company plans to study Curefilm as a platform for both microdoses and macrodoses of psychedelics and pursue FDA approval for the commercialization of the products.

Psychedelic biotech company Cybin Inc., has completed its 20th pre-clinical study and is processing its proprietary psychedelic molecules CYB003 and CYB004 into Investigational New Drug (IND)-enabling studies. IND-enabling studies are conducted to evaluate safety prior to human studies and to estimate starting doses for clinical trials.

Lattice Biologics Ltd., a company that develops and manufactures biologic properties for a variety of surgical applications, announced that it will change its business strategy to focus on the fast-growing psychedelics and cannabis markets. As part of that effort, the company will create a life sciences subsidiary to concentrate on the research and commercialization of psychedelic products. This will be done in combination with its stem cell-based regenerative compounds while also leveraging its distribution expertise.

“With Lattice’s extensive knowledge of processing, purifying, and manipulating stem cells, we intend to be a leader in the emerging psychedelic market,” said CEO Guy Cook.

Beginning the fiscal third quarter 2021, the Biologics Business will be presented as discontinued operations. As part of the reorganization, the wholly-owned subsidiary Lattice Biologics Inc. has filed a voluntary petition under Chapter 7 of the U.S. Bankruptcy Code.

Red Light Holland’s subsidiary LH Netherlands B.V. has acquired SR Wholesale B.V., one of the premier distributors of psychedelic truffles in the Netherlands. It’s also a leading distributor of cannabis products across Europe.

“We expect this transaction to serve as a launchpad for Red Light Holland to broaden operations, create new homes for our iMicrodose packs and build brand exposure into multiple European markets,” Todd Shapiro, Red Light Holland’s CEO said in a statement. “We are quite thrilled, after months of tough negotiations and careful due diligence, to move forward as the largest legal psychedelic distribution publicly traded company in the world.”