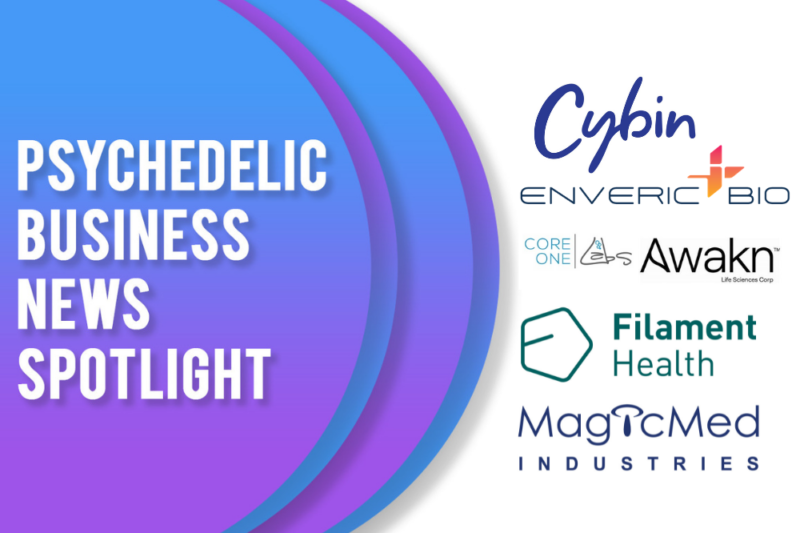 This week in psychedelic business news: A next-gen psychedelic for stroke care, a major merger, and two more companies list on NEO Exchange.

Akome Biotech Ltd., a subsidiary of Core One Labs Inc., has begun development of a next-generation psychedelic formulation, known as AKO001, specifically for mitigating neurological damage caused by ischemic strokes. Ischemic strokes are the most common type of stroke, and are often caused by a blood clot that blocks or clogs a blood vessel in the brain.

The formulation contains to psychedelic compound N,N-dimethyltryptamine (DMT), along with a specific plant bioactive which, when combined, are believed to work in a complementary and mitigating manner when administered following an ischemic stroke event. The company has filed a composition of matter patent application for AKO001 with the U.S. Patent and Trademark Office.

Cybin Inc., announced the completion of its 51st preclinical study into its growing number of psychedelic compounds. The company is designing them for potential therapeutic applications for a number of mental health indications. To date, the company has evaluated more than 50 novel compounds through collaborations with experienced contract research organizations for pharmacokinetic properties, metabolic stability, receptor binding, and safety in order to identify preferred candidates for further development.

The company previously announced it had identified one clinical candidate—CYB001—and three development candidates—CYB002, CYB003, and CYB004—from the tryptamine family which are advancing toward clinical evaluations for the treatment of major depressive disorder, alcohol use disorder, and anxiety.

Enveric Biosciences has entered into an agreement to acquire MagicMed Industries Inc., possibly the first, and likely the largest, merger involving both psychedelics and cannabinoids. MagicMed has focused primarily on the research and development of novel psychedelic molecules, and is known for its Psybrary, an impressive library of psychedelic derivatives. Enveric is a pharmaceutical company that engages in developing various cannabinoid medicines for cancer care.

The acquisition will help Enveric expand its pipeline of naturally occurring compounds. It will also enable MagicMed more access to capital and big pharma connections, and allow the company to test beyond preclinical stages and ultimately bring new drug candidates to market in-house.

“Listing on NEO, a senior exchange with high governance requirements, helps to establish Filament as a leader in the psychedelics industry,” said Filament CEO, Benjamin Lightburn. “NEO has proven to be a strong and supportive partner to innovative companies like Filament. The capital access made possible by this going-public transaction allows us to further our mission of getting safe, natural psychedelics into the hands of everyone who needs them, as soon as possible.”

“Listing on the NEO Exchange is an important milestone for Awakn as we continue to build on our dual strategic focus of developing psychedelic drugs, therapies, and enabling technologies to treat addiction and delivering psychedelic treatments for addiction in our medical clinics across the United Kingdom and Europe,” said Awakn CEO, Anthony Tennyson. “The NEO listing will enable us to accelerate the execution of our drug discovery, therapy development, advanced analytics, and clinic roll-out programs.”