What Is Bicycle Day? Celebrating the First Human LSD Trip 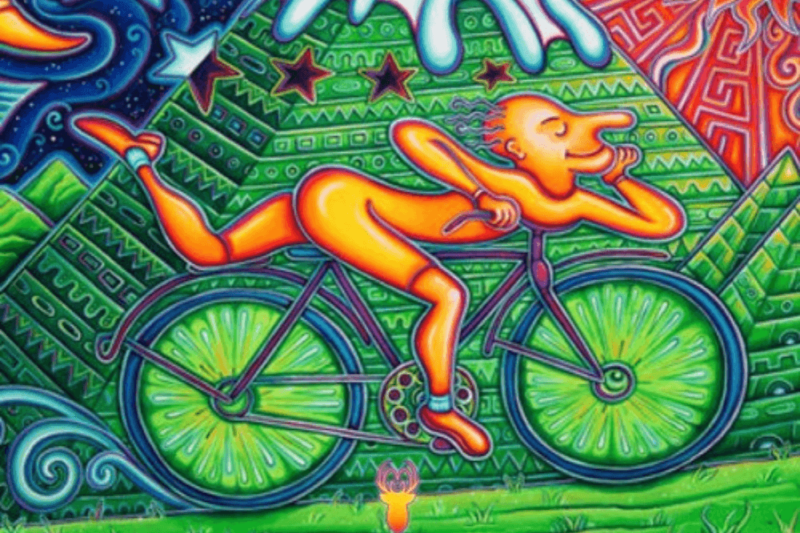 It's been 78 years since the first LSD trip happened. Here's what you need to know.

April 19, is the 79th anniversary of the day Albert Hofmann, the Swiss father of psychedelic medicine, became the first human to ingest lysergic acid diethylamide, better known as LSD.

Why is it called Bicycle Day? Because Hofmann took his acid trip while riding a bike.

Hofmann, a chemist, was unaware of the psychedelic properties of the compound he synthesized from the ergot fungus until a small amount of LSD was accidentally absorbed through his skin. It made him feel a bit peculiar, which he described as “a not unpleasant intoxicated-like condition.” Convinced that the chemical could contain significant and unusual properties, he decided to conduct some experiments on himself.

At 4:20 p.m. on April 19, Hofmann ingested a 0.25mg dose of LSD, which he assumed was a small amount but turned out to be a rather hearty one. He hopped on his bike and headed home from his lab, later describing the first human acid trip this way:

“…little by little I could begin to enjoy the unprecedented colors and plays of shapes that persisted behind my closed eyes. Kaleidoscopic, fantastic images surged in on me, alternating, variegated, opening and then closing themselves in circles and spirals, exploding in colored fountains, rearranging and hybridizing themselves in constant flux…”

Hofmann’s bicycle adventure has left a mark on history. LSD is now being studied as a viable treatment option for a number of mental and physical conditions. But Bicycle Day wasn’t recognized as a holiday until 1989, when Thomas B. Roberts, a professor at Northern Illinois University, founded the first Bicycle Day celebration at his home. Now, as the psychedelic industry is booming, and decriminalization is happening across the U.S., there are all sorts of celebrations. Here are some Bicycle Day festivities you can join in on:

Psilocybin As Effective as Lexapro in Treating Depression: Study
Scroll to top