Why Is DMT Called The Spirit Molecule? 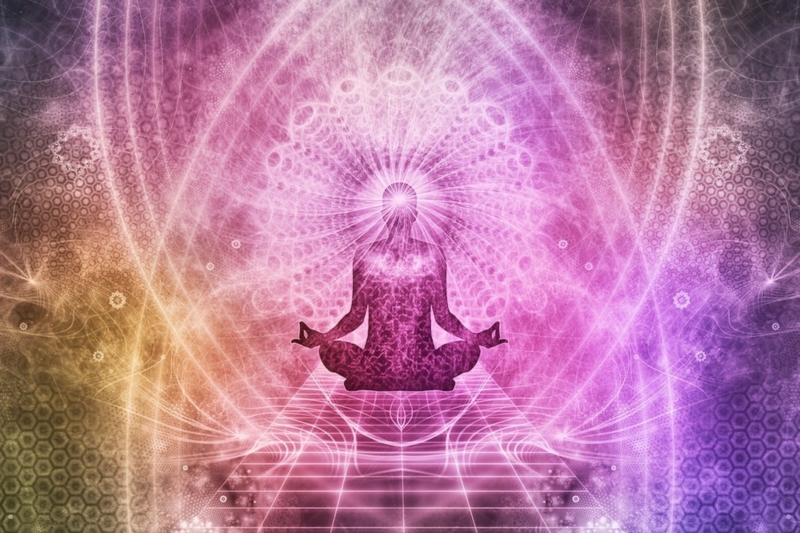 Why is DMT called “the spirit molecule?” Here’s what to know about the world’s most powerful psychedelic.

Why is DMT called “the spirit molecule?”

Rick Strassman was the first American researcher to receive government approval to study hallucinogens after a two-decade ban. Between the years of 1990-95, the clinical associate professor of psychiatry administered roughly 400 doses of N,N-dimethyltryptamine (DMT) to nearly 60 patients at the General Clinical Research Center of the University of New Mexico Hospital. His findings changed the course of his career.

While Strassman initially confined his clinical work confined to recording the physiological effects of DMT, such as heart rate and blood pressure, he couldn’t deny the overwhelming religious experiences reported by participants. As he reported in his book, DMT: The Spirit Molecule (and subsequent documentary film, for which I served as the music supervisor and co-wrote the theme song), over half of the volunteers claimed to have interacted with non-human beings while under the influence of DMT.

Strassman coined the term “spirit molecule” based on this half-decade of research as well as the apparent spiritual nature of DMT. These studies are widely credited for the resurgence of interest in psychedelics in both popular culture and clinical research. While tens of millions of dollars are flowing into the psychedelic research space today, we can point to Strassman for reviving this burgeoning field of research.

DMT is most well-known as the psychoactive component of the “vine of the soul,” ayahuasca. Whereas ingestion of DMT alone results in a five- to 10-minute trip—the length of time Strassman’s volunteers were under the influence after being injected—when combined with particular vines, such as the Ayahuasca liana (Banisteriopsis caapi), the experience lasts for four to six hours.

Traditionally, ayahuasca is sourced from the shrub P. viridis, though many substitutes have been documented. Likewise, numerous vines contain alkaloids that serve as monoamine oxidase inhibitors (MAOIs), which make the DMT in the brew orally active and long-lasting. In the Colombian Tukano community, for example, six types of ayahuasca are used ceremonially, and each is said to produce different effects.

DMT is ubiquitous in nature. Every mammal that has been tested (including humans) produces it endogenously. At least 50 plants contain it. As with other psychedelics, DMT is related to serotonin, as well as melatonin. As the latter is produced by the pineal gland, some speculate that DMT is a mystical key, with the pineal gland being the physical correlate of the “third eye.” In fact, Rene Descartes identified this gland as the “Seat of the Soul”

The active ingredients of ayahuasca were first isolated by German pharmacologist Louis Lewin in the 1920s. He initially discovered the psychotropic effects of harmine, though some researchers, such as ethnobotanist Jonathan Ott, would later describe the experience of this alkaloid as closer to Valium.

DMT was first synthesized by German chemist Richard Manske in 1931. It took 15 years for Brazilian chemist Oswaldo Goncalves de Lima to discover it as a naturally-occurring alkaloid in plants. DMT wasn’t discovered in humans until the mid-fifties, around the time when Hungarian chemist Stephen Szara became the first researcher to scientifically study its psychotropic effects.

Chemically, DMT, as well as the related 5-MeO-DMT, are similar in composition to psilocin and LSD. As pharmacologist Richard J Miller puts it in his book, Drugged, “substances like LSD, psilocin, and DMT, under the appropriate circumstances, can all produce classical hallucinogenic experiences that are qualitatively indistinguishable from one another.”

Rick Strassman has straddled the line between anecdote and data for decades. As spirituality is always subjective, regardless of measurable physiological effects, discerning between universal themes and personal experiences is challenging.

Outside of his role as a clinician, Strassman is a longtime Zen Buddhist practitioner. Early in his research on DMT, he couldn’t help but notice similarities in the experiences of meditation and psychedelics. This research in the early nineties led to his hypothesis that the pineal gland is the key to understanding near-death and mystical states. As he writes,

“This tiny organ, the ‘seat of the soul’ or ‘third eye’ of the ancients, might produce DMT or similar substances by simple chemical alterations of the well-known pineal hormone melatonin, or of the important brain chemical serotonin. Perhaps it is DMT, released by the pineal, that opens the mind’s eye to spiritual, or non-physical, realities.”

The connection between meditation and psychedelics has been studied in detail. Science journalist James Kingsland notes that psychedelics and meditation both decrease activity and connectivity in the brain’s default mode network—in particular, the posterior cingulate cortex (PCC), parahippocampus, and medial prefrontal cortex. This loosening of the “ego center” could be fundamental in the therapeutic applications of psilocybin, iboga, LSD, and ayahuasca currently being studied. As with Strassman, Kingsland points to serotonin when considering their therapeutic effects.

“By simulating the deluge of serotonin that accompanies life-threatening stress, psychedelics appear to ‘reboot’ the brain, providing an opportunity to unlearn the maladaptive programming that underlies addiction, depression, PTSD and OCD, and replace it with the healthier patterns of thought and behavior.”

Parallels between mysticism, meditation, and psychedelics reached a fever pitch in the 1960s. Critics found psychedelic substances to be “cheating” the long and hard work of meditative practice. Strassman considers both tools that help change thought and behavior. A number of volunteers in Strassman’s trials found their DMT experiences to be an “enlightenment experience” that they carried with them for years afterward.

This was also evidenced in the famous “Good Friday Experiment,” when Harvard divinity students were dosed with psilocybin in 1962. Twenty-five years later, all students except one rated the day as a highlight of their spiritual life. The Johns Hopkins trials, in which psilocybin was used to treat critically ill patients struggling with existential distress, produced similar results: 70 percent of participants rated the day as one of the five most profound experiences of their lives five years after the study concluded.

A common motif reported during an ayahuasca ceremony: the initiate lies in the ground as their soul leaps from their body and travels through the air. Sometimes this vision occurs with their eyes closed as they survey the cosmos; other times, they look down and stare at their meat casing (as phrased in at least one translation of the Bhagavad Gita) on the ground. Regardless, “traveling” is a trademark experience of the psychedelic trip.

Strassman also relates this phenomenon to the pineal gland. According to him, this gland becomes visible in the fetus at 49 days, which happens to be the length of time of the in-between state of souls in some Buddhist texts. This philosophy, most famously expressed in The Tibetan Book of the Dead, states that upon leaving one body during death, the soul hangs out in a liminal space (known as the Bardo) before appearing in another. Strassman continues:

“Perhaps the life-force of a human enters the fetus at forty-nine days through the pineal. And it may leave the body, at death, through the pineal. This coming and going would be marked by the release of DMT by the pineal, meditating awareness of these awesome events.”

In the introduction to the WY Evans-Wentz’s translation of The Tibetan Book of the Dead, Lama Anagarika Govinda observes that “the initiated disciple attains dominion over the realm of death, and, being able to perceive death’s illusory nature, is freed from fear. This illusoriness of death comes from the identification of the individual with his temporal, transitory form, whether physical, emotional, or mental, whence arise the mistaken notion that there exists a personal, separate egohood of one’s own, and the fear of losing it.”

This “loss of ego” is exactly what happens during the psychedelic ritual. The brain’s regions associated with ego are taken offline. The sense of oneness reported by Strassman’s volunteers—the sensation of being part of everything in the universe—can only occur when the limitations of the individual become apparent. The biography we cling to is only a fraction of reality. By removing anecdotes from one’s consciousness, psychedelics open you to possibilities you wouldn’t have otherwise considered.

One important note: Strassman is clear that relating DMT to the pineal gland is speculative. Another possibility is the oscillation of brain waves that occur in certain prey animal’s bodies while dying. This biologically protective measure is believed to have evolved to provide some level of comfort to, for example, a deer being devoured by lions. Humans have only been apex predators for a very short time. The seemingly mystical state that occurs while dying could be a throwback to an era when we were much more likely to be eaten by other animals. Even if DMT is released by the pineal gland during death, this evolutionary trait could provide another reason for this phenomenon.

“They’re looking for deeply profound spiritual experiences and a sense of connection, a sense of energy, a sense of being in touch with their own unconscious and their own deeper levels of the mind.”

As all psychedelics researchers understand, set and setting are the primary drivers of the experience. Doblin speculates that the reason so many volunteers in Strassman’s study might have seen aliens is environmental. Unlike traveling to the jungles of Peru to sit in ceremony, they were in a hospital room surrounded by clinicians. The aliens might have been symbolic representations of their surroundings.

Regardless, Doblin points out that the dangers of ayahuasca “are primarily psychological rather than physiological,” as Strassman’s research attests.

The same goes for Charles Grob, the first American research granted approval to study both ayahuasca and MDMA in the nineties. His study on members of Uniao do Vegetal, who ritualistically sip the brew of the soul vine twice a month, are “very high-functioning individuals.” Psychedelics are some of the physiologically safest substances in existence.

Doblin, Grob, and Strassman all agree on one point: getting addicted to psychedelics isn’t possible. These substances don’t work in the body like opiates or antidepressants. You could become addicted to the experience of ritual, mind you, yet these plant medicines are unlikely to cause long-term damage—though, as Doblin points out, the potential for psychological harm is certainly possible.

DMT has been used for centuries (and likely longer) in rituals across South America. For example, the Tukanoans created the Yurupari ceremony to initiate young boys into manhood with ayahuasca. The spiritual experience represented a rite of passage from one phase of being to the next, much like the Bardo transports souls across time.

As Ott writes, while shamanic ecstasy was the goal of these ancient rituals, today substances like DMT and ayahuasca are playing an important role in more pedestrian (but equally important) pursuits, such as depression and addiction treatment. Whereas “ecstatic experience is what reveals to us the sublime grandeur of our universe and the fluctuating, shimmering alchemical wonder that constitutes our everyday consciousness,” in our era, he predicts that “entheogens such as ayahuasca could be the appropriate medicine for hypermaterialistic humanity on the threshold of the new millennium.”

Regardless of the origins of alien visions while under the influence, Strassman sees the syncretism of DMT and Buddhism—of psychedelics and meditative practices, broadly speaking—as an important next step in our evolution. He believes these two practices complement one another well: the structured, disciplined approach of meditation combined with the wisdom of love and compassion psychonauts experience after imbibing plant medicine. Such a marriage would certainly live up to the promises of this profound “spirit molecule.”

Is it TOO LATE to buy MindMed? [MMEDF] 🍄