11 Celebrities Whose Lives Were Changed by Psychedelics 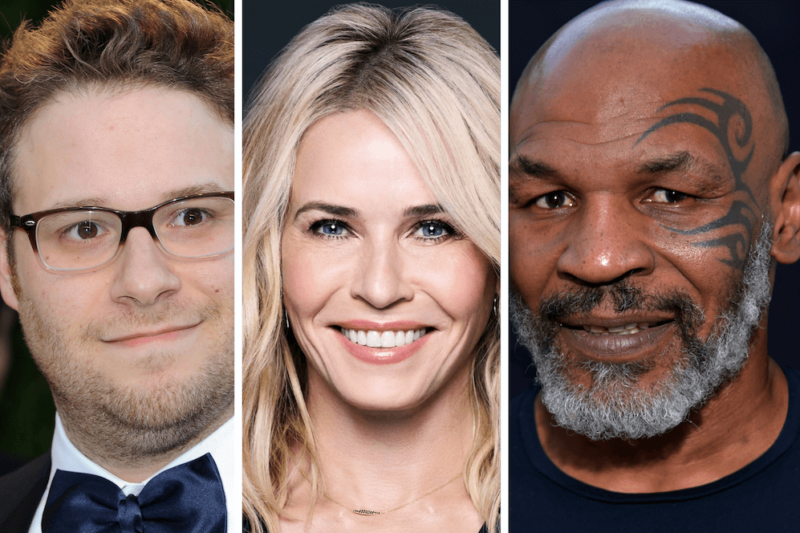 From Sir Paul McCartney to Joe Rogan, these celebrities all credit psychedelics with changing their lives.

Scientific studies reveal what many cultures have known for thousands of years—psychedelic medicines hold the potential to heal the mind, body, and soul, and promote lasting change.

After a half-century of stigmatization following the War on Drugs, psychedelics have found a respectable place in research, with therapies like psilocybin, MDMA, ketamine, and DMT showing promise in treating notoriously difficult-to-treat mental health conditions including anxiety, depression, post-traumatic stress disorder (PTSD), and opioid addiction.

As public perception of psychedelics shifts, more people have begun to share how psychedelic medicine changed their lives for the better, including many celebrities. Here are some of their experiences.

After their first experience with LSD in 1966, the Beatles’ John Lennon and George Harrison insisted Paul McCartney and Ringo Starr experience the psychedelic. “John and I had decided that Paul and Ringo had to have acid because we couldn’t relate to them anymore. Not just on the one level—we couldn’t relate to them on any level, because acid had changed us so much,” Harrison told Rolling Stone in 1971.

Starr was game, but McCartney declined. “We’d heard that you’re never the same,” he said of LSD in Anthology. “It alters your life and you never think the same again.” But, a year later, unaccompanied by his fellow bandmates, McCartney did try acid. In a 1967 interview he said the experience “explained the mystery of life.”

Later, Lennon presented the band with what would later become known as the song “Tomorrow Never Knows.” McCartney introduced the sound in the song that describes when the soul “surrender[s] to the void.” Thus, their experience with LSD ultimately helped lay the soundtrack for the emerging psychedelic era.

Earlier this year, Miley Cyrus told Rolling Stone that the hallucinogenic brew ayahuasca was “definitely one of my favorite drugs I’ve ever done.” The Hannah Montana star said she tried the ceremonial tea shortly after losing her beloved dog Floyd to coyotes. “When I was on my trip, all I could focus on was animals. I was puking up different animals—dolphins and seals and giraffes. It’s really crazy,” she recalled.

While under the influence, Cyrus said snakes grabbed her legs and led her to “Mother Ayahuasca” who walked her through her entire trip. Later, she told New York Times that she went to a Chinese healer who “sent me into a state where my dog was lifted out of my lungs and placed on my shoulder. I pet my dog for like three hours.”

Canadian actor, comedian, and self-proclaimed stoner Seth Rogen has never shied away from talking about his experimenting with substances. He smokes cannabis daily and has even attended premiers on MDMA. He also enjoys ‘shrooms from time to time.

During an interview with Vulture, he credited magic mushrooms (which he called a “very insightful drug—very introspective”) for prompting him to make some “real-life decisions.”

When asked how much of his comedic sensibility was enhanced by drugs, he said, “That’s hard to know. What I do know is that I’ve started reading more about drugs as I’ve gotten older and what I’ve read has made me think, ‘Man, I did a lot of ‘shrooms when I was like 13 and 14 years old—dozens of times at a formative age.’ It’s a real consciousness-expanding drug, so maybe it’s had pretty deep effects.”

Australian indie-pop musician Ben Lee was so moved by his personal experiences with ayahuasca that he dedicated an entire album to the South American psychedelic brew. Ayahuasca: Welcome to the Work, released in 2013, contains a mix of songs titled “Welcome to the House of Mystical Death,” “Meditation on Being Born,” and “The Will to Grow.” The album was his opportunity to “come out of the closet as someone that has used these medicines for my own spiritual healing and spiritual growth,” he told Music Feeds.

Psychedelics have made Lee a better friend, too. “In some work I did supporting people going through their journeys with psychedelics there’s a skillset creating a loving space of support for other people going through their process,” he says. Rather than a friend who tells you what to do to overcome your problem, “I … like the type of friend who loves you through figuring out your process of what you need to do.”

Coincidentally, he also wears a necklace built around a tab of LSD.

Sting calls the many psychedelic trips he’s taken in his life to be “valuable experience[s].” Not all of them have been walks in the park. But, he says, he has always learned from them which helps keep his ego in check.

“What the experience does is it presents you with the idea of mortality … It’s your own mortality, the mortality of the planet … that is the central issue of consciousness,” he said.

The English musician recalled visiting a friend’s farm and taking peyote. Suddenly, he was called on to assist a farmer with delivering a calf, during which he became increasingly high. “For me, the meaning of the universe cracked open,” he said.

Two-time Stanley Cup Champion Daniel Carcillo’s brain took the brunt of his 10-year hockey career. He was diagnosed with seven concussions and likely suffered at least 100 more. It left him with headaches, insomnia, and impulse control issues. At times, he felt so hopeless, he’d sit in his trunk and think about ways to kill himself.

And then he tried ayahuasca. The experience transformed his life and healed his brain. Now Carcillo is finding a way for athletes who have suffered lasting brain injuries from repeated head blows to get the same kind of life-saving psychedelic treatment.

Last year, Carcillo co-founded Wesana Health Inc., a company that will use psilocybin to treat brain injuries. “When we set out to establish Wesana, we were personally very motivated to bring alternative treatments to market for those suffering from traumatic brain injury,” Carcillo said. “To our great pleasure we were able to find investors that are equally as motivated in not only our business model, but in the importance and unmet need for the innovative treatments we are developing.”

Former NBA star Lamar Odom says he dealt with anxiety and past trauma by self-medicating with cocaine and other drugs. But his habit turned into a dangerous addiction. In 2015, he overdosed outside a Las Vegas brothel and suffered 12 seizures, six strokes, and a stint on life support.

When Odom regained consciousness, he continued to struggle with addiction. That’s when American entrepreneur Mike “Zappy” Zapolin coordinated a “psychedelic intervention” for the basketball star. Odom’s journey to recovery can be seen in the film “Lamar Odom Reborn,” which Zapolin directed. In the film, Odom credits ketamine and ibogaine therapy for saving his life.

Comedian Chelsea Handler traveled to Peru to attend an ayahuasca ceremony to “put things into perspective.” The psychedelic brew sent her down memory lane, during which she learned she needed to have more patience and understanding for her sister.

“Love her harder. That’s what I was being told,” she recalled in her 2019 memoir Life Will Be the Death of Me…And You Too!

Handler also credits psychedelics for leading her to therapy which, in turn, made her realize the root of her anger and frustration stemmed from a lack of empathy.

“Sympathy is feeling bad for someone or their situation…it’s more like pity,” she recalled her therapist explaining to her. “Empathy is … thinking about what it feels like to be another person and understanding their experiences and outlooks and know that they may be unlike your own.”

Joe Rogan, comedian, mixed martial arts color commentator, and host of the podcast Joe Rogan Experience, is a huge advocate for de-demonizing psychedelics and promoting the benefits the medicines offer.

“It’s a weird experience when you’re just trying to talk openly about how you think psychedelic drugs and [cannabis] are beneficial, or a lot of different drugs, especially plant-based ones, can be beneficial,” he said on a recent podcast. “Especially those ones that have some connection to organic life, I feel like you can learn something from them, from psilocybin mushrooms, from peyote, from marijuana. They can be used as a tool.”

Former heavyweight boxing champ Mike Tyson says his experience with 5-MeO-DMT, aka toad venom, led him back to the boxing ring after a 15-year retirement.

“The toad is a totally interesting aspect of my whole being now,” he said on his “Hotboxin’ with Tyson” podcast. “It takes you to a place that takes you to another dimension. Ever since I did it, I’ve had a miraculous change about me.”

In fact, “The medicine told me to get in shape,” he said. And he did, working out and losing 100 pounds. Last November, he was fit enough to face Roy Jones Jr. in the ring. While the fight ended after a full eight rounds in an unofficial draw, Tyson said he felt satisfied with his performance.

One-half of the 1960s duo Simon and Garfunkel, Paul Simon admits to briefly experimenting with LSD in the 1960s. But in 1998, when his Broadway musical The Capeman tanked after just six months, his self-esteem plummeted. He traveled into the Amazon to seek refuge with ayahuasca.

The experience brought Simon peace, as well as material for his 1990 song “Spirit Voices,” in which he writes, “Some stories are magical, meant to be sung/Songs from the mouth of the river/When the world was young/And all of these spirit voices rule the night.”