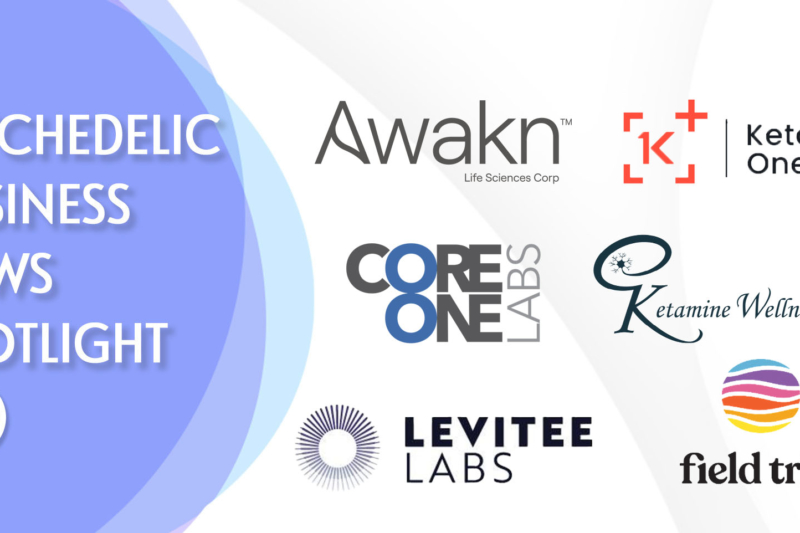 This week in psychedelic business news: Another psychedelics company starts trading on OTCQB; another ketamine trial delivers promising results; and another patent is issued relating to a novel psychedelic compound.

This week in psychedelic business news, Vancouver-based pharmaceutical company Core One Labs Inc. made progress in bio-synthesizing N,N-Dimethyltryptamine (“DMT”). The company also received an expanded license from Canada’s federal health department allowing its subsidiary, Vocan Biotechnologies Inc., to research and produce biosynthetic DMT along with the proprietary psilocybin it had previously been developing.

Ketamine Wellness Centers (KWC), a subsidiary of Delic Holdings Corp, announced the grand opening of its Salt Lake City clinic on Monday. The new facility is the first Utah location for KWC, which operates 11 ketamine infusion treatment clinics across nine states and has administered over 61,000 treatments to date. With seven treatment rooms, the Salt Lake City clinic becomes the largest ketamine infusion clinic in the state. “Utah currently experiences one of the highest rates of mental health concerns in the country with lower access to care, and KWC aims to serve this new community of patients struggling with treatment-resistant conditions,” KWC CEO Kevin Nicholson said.

Field Trip Health Ltd. announced Tuesday that the U.S. Patent and Trademark Office issued a Notice of Allowance for claims related to FT-104, a.k.a. “Isoprocin Glutarate,” the psychedelic therapy company’s first novel psychedelic molecule in development. Claims in the allowed patent application, titled “Tryptamine Prodrugs,” cover composition of matter and the use and manufacturing of a family of hemi-ester compounds of hydroxytryptamines, including FT-104, which is described as a more soluble, stable prodrug form of the psychedelic molecule 4-HO-DiPT.

Ketamine One Begins Trading on the OTCQB Marketplace

Finally in this week’s biggest psychedelic business news, Ketamine One Capital Limited, a psychedelic medicine and wellness company, was up-listed from the Over-the-Counter (OTC) Pink Sheet Open Market to the OTCQB Venture Market, a mid-tier market generally seen as more transparent and investor-friendly than the Pink Sheet. Ketamine One will now trade on the OTCQB under the symbol “KONEF.”

Core One Labs is exploring DMT therapy for anxiety and depression in a partnership with Ketamine Infusion Centers.
Can DMT Treat Depression?

Is Ketamine Therapy an Effective Treatment for Alcohol Use Disorder? A New Phase...
Scroll to top