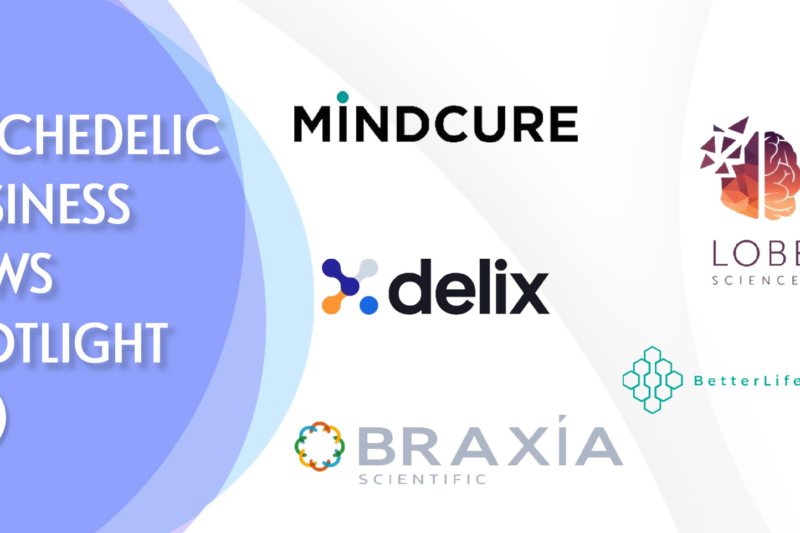 This week in psychedelic business news, new research by Braxia Scientific has demonstrated that ketamine may be effective as a standalone treatment for depression. The study showed that participants in the ketamine monotherapy group achieved response and remission rates of 39.1% and 17.4%, while participants who received ketamine treatment and antidepressants saw response and remission rates of 21.9% and 6.7%, respectfully.

Mind Cure Health announced its new clinical research program, the “Desire Project,” which seeks to find out if MDMA can help women lacking desire target the roots of this emotion. Researchers will be investigating if MDMA-assisted psychotherapy can treat female hypoactive sexual desire disorder, a common sexual disorder that is under-detected and under-treated.

Lobe Sciences has announced that its psilocybin plus N-Acetylcysteine (NAC) combination performs better in rodent models of mild traumatic brain injury (mTBI) and post-traumatic stress disorder (PTSD) than rodents treated with other therapies. According to the company’s preclinical research findings, the rodents treated with this combination performed statistically significantly better than those treated with monotherapy with psilocybin, NAC, or a placebo.

Biotechnology company BetterLife Pharma has filed for patent protection of its new 2-Bromo-LSD compositions to treat cluster headaches, neuropathic pain, and a range of mental health conditions, including depression, anxiety, PTSD, and related disorders. One of the compounds, second-generation psychedelic TD-0148A, is non-hallucinogenic, which the company says is unique in that it eliminates regulatory hurdles.

Last but not least in this week’s psychedelic business news: Preclinical neuroscience company Delix Therapeutics has raised $70 million in a Series A financing round, which will be used to progress the company’s two lead drug candidates through Phase 1 clinical trials, further expand its drug discovery platform of novel neuroplasticity-promoting compounds, and grow its team. To date, Delix Therapeutics’ discovery engine has produced nearly 1000 novel compounds, some of which have been identified as clinical development candidates.

Awakn Life Sciences is looking at psychedelics for addiction, namely MDMA and ketamine for alcohol use disorder.
Majority of Oregon Adults Interested in Psilocybin Want to Try Microdosing

Will Smith Comes Out of the Psychedelic Closet
Scroll to top