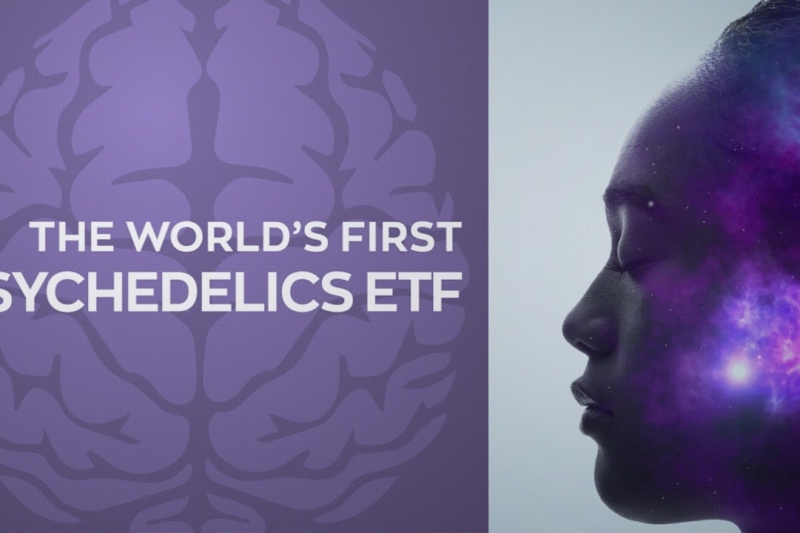 You want to talk about something really far out, man? Picture this: The counterculture psychedelic drugs of the 1960s and ‘70s, that encouraged people to turn on, tune in, and drop out, are now the darlings of the pharmaceutical and investment industries. The world’s first psychedelic ETF (exchange traded fund) just launched last month. No, you're not having a bad trip. It’s real. And it’s about to change the world as we know it, in a really, really good way.

What Is An ETF?

An ETF, in short, is a bundle of investments. Together, they trade on a stock exchange. In this case, the Horizons Psychedelic Stock Index ETF (PSYK) is trading in Canada, where a bulk of psychedelic companies are based. ETF funds are bought and sold during normal stock trading.

In an ETF, the fund provider owns and tracks the assets, selling shares in that fund to investors. When you’re a shareholder of an ETF, you own a portion, but not the underlying assets.

“The space is moving very, very quickly,” MindMed co-founder and co-CEO JR Rahn told Yahoo Finance Live. “What we're seeing now is, I believe, a demand from both retail investors and institutional investors on how to best index this space and how to gain the most exposure to the most amount of clinical trials and technologies. So it was just a natural progression that somebody was going to set up an ETF.”

Dozens of companies in the emergent psychedelics sector have gone public recently. (You can see a recent list of them here.)

Not only are these companies attracting investors, they’re also attracting Big Pharma veterans.

The Power of Psychedelics

There are currently dozens of clinical trials underway across the globe looking at psychedelics for treating a host of issues. They’ve proven highly effective in treating depression, anxiety, PTSD, addiction, eating disorders, and a host of other mental health issues. This is a big deal.

The care-free Summer of Love attitudes of the 1960s are, sadly, long gone. We’re in the midst of a global pandemic. Depression and addiction rates are at all-time highs. People are hurting. And while there are scores of pharmaceuticals that work for millions, there are millions of people they don’t work for. Treatment-resistant depression is diagnosed after two different pharmaceuticals fail to deliver relief.

Psychedelics don’t seem to have this problem. Studies continue to point to near-immediate and lasting benefits of psychedelics like psilocybin. For some, the relief isn’t just a lifting of the depression; it’s a bona fide life reset.

The Future of Psychedelics

As companies go public and bring in big investments, policies are following suit, too. Oregon became the first state in the U.S. to legalize psilocybin treatment. Voters passed the measure last November. Now, the state must determine the criteria for treatment. But by 2024, there could be dozens of legal “magic mushroom” treatment facilities in the state, if not more. Other states and Canada are looking to do the same. While decriminalization has happened in a number of cities and states, legalization seems inevitable. For substances that carry serious federal charges for possession, this could be a game-changer.

Psychedelics are getting another boon, too that’s taking them mainstream: athletes. Former NHL player Daniel Carcillo healed himself of traumatic brain injuries using psychedelics. The injuries ended his career on the ice early, but they’ve put him in a position: CEO of Wesana Health. There he’s helping to bring psychedelics to athletes and people with brain injuries. He recently enlisted former MMA fighter, Ian McCall, to help with the mission.

Even former heavyweight champion Mike Tyson is speaking openly about his use of 5-MeO. Celebrities too, including the Goop staff and Miley Cyrus have been open about their use of psychedelics.

Does this mean the hippies have finally won? Well, take a sip of your kombucha or organic green tea, and have a good think on it. But the short answer is yes. And we may all be better off because of it.