5 Fiercely Psychedelic Songs (Not From the ’60s)

Here are five deliciously trippy songs to add to your next psychedelic playlist before embarking on a journey toward ego death.

Mention the label “psychedelic” in reference to defining a music genre, and several venerated artists may come to mind: Jefferson Airplane, The Grateful Dead, The Chambers Brothers, Pink Floyd, The Beatles, and Jimi Hendrix.

The respective oeuvres of the artists on that short list alone certainly command top billing when citing work that was either influenced by the psychedelic experiences of their creators, or inspiring and accompanying the psychedelic experiences of legions of fans, leaning into the deepest possible experience of the music. Obviously, all of the aforementioned artists sprang from a time that was arguably the most publicly psychedelic decade in American history, the 1960s.

Music has continued to evolve over the ensuing decades, as has our understanding and utilization of the psychedelic experience, be it through formal plant medicine ceremony, holotropic breathwork, or microdosing. Subjective as a music motif, one can now hear it incorporated into a wide variety of genres and into the fringier reaches of song.

The following entries might not come to mind immediately for most people when considering the psychedelic label as it applies to sonic compositions, but to my ear, each of these tunes evoke aspects of the psychedelic experience. From the transcendent and sublime to the disorienting and cacophonic, I think the shoe fits.

Whether they accompany your next journey or simply inspire further listening, here are five fiercely psychedelic songs not from the '60s.

Admittedly, when I first heard Animal Collective, my immediate response was to bristle at the assured snobbery of the art school kids, too cool or jaded to be my friends, who were bound to be way into Animal Collective. Seeing them in concert was an undeniably ecstatic experience however, and their experimental nature has persisted for over two decades of genuine productivity. The underlying dulcet tones of the piano on “Two Sails” are the anchor for the spirit on this piece, the shamanic icaro, drawn in sound and light that serve to steady the journeyer as a base frequency amidst all other sensory experience. I always think of Animal Collective’s music as an echo of the psychedelic realities Brian Wilson toiled to express.

‘COLORS OF THE RAINBOW' by Lonnie Liston Smith, from Album ‘Visions of a New World' (1975)

The softer side of psychedelic, the pure manifestation of love and gratitude in music; something to close your eyes to and envision everything that comes to mind readily as good, healing and vital. “Colors” is an almost ambient piece from the jazz-funk masterpiece from 1975 that front to back poses none of the challenges one may come to expect from a macro experience. That alone may be off-putting to those who need their music a bit more “toothy,” but if you’re intent upon a soundtrack for your appreciation of how grass feels underfoot, or how sun feels upon skin, look no further.

Many of us grew up with the idiom, “Don’t judge a book by its cover.” While this may be helpful in maintaining third-grade civility, half the fun of albums is immersion in the cover art. And the cover of Peacock’s 1972 album is decidedly psychedelic. The album’s lead track itself is a prototypical jazz/rock fusion, thorny with electronic Moog accentuation and swinging between hallucinatory malaise, upbeat hustle and laid back groove. We speak of pioneers in the psychedelic space. Annette Peacock has always been a musical pioneer, in her own words, often creating work “20 to 40 years too early.”  The icing on the cake? She experienced transformative LSD therapy under the guidance of Dr. Timothy Leary in the early 1960s.  Essential listening.

By consensus, the purest psych-rock entry here. “Amanita” last year celebrated it’s 25th anniversary and received a special-edition release. Named after the mushroom with hallucinogenic properties, the contemporary tropes of psychedelic rock are abundant here in the hinted at lilting vocals, glittering guitar interplay that opens up into chasms of distortion and a locked groove that never deviates from its onset. The notion of “jamming” is all about existing in interplay with other musicians, in the present moment and the guitar is particularly adept at facilitating such interconnectedness. When asked about how psychedelic substances have influenced their work directly in an interview with Psychedelic Baby Magazine, the band had this to say: “The thing about psychoactive substances is that they are related to the ideas of play and playing, they are the ticket to the playground and discovery and finding connections and vibrations and colors and sounds and truth.”

Ending on a short and sweet series of lush notes, go watch the video for Flying Lotus’ “Remind U” and tell me if it doesn’t remind you of the trippy animations on Monty Python that used to rattle me as a kid. Lotus is the moniker for producer LA-based Steven Ellison who continues to grace us with highly-evocative music that creates colorful space. Deep and distant tones, organic and electronic, pulse and permeate over his six LP canon and counting. It is in large part the hard to pin down “label” Flying Lotus, which to this author represents one of the most psychedelic components of his work: an expansiveness that invites exploration and rewards with mindful integration.

With the producer's heavily sampled beats and their secretive identity, they managed to charm listeners - a spell that looks set to last. 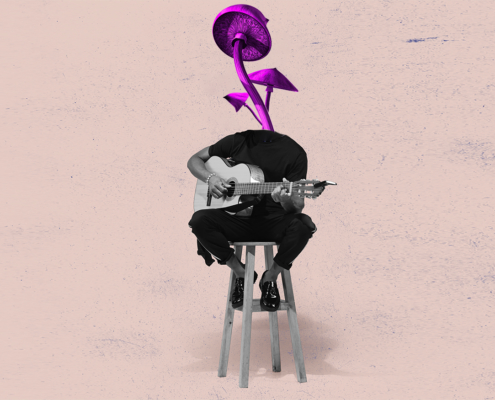 Whether you are going on a trip soon and need some tunes to accompany you or are simply looking for new music, here is a list of the top 5  psychedelic artists you should check out!
Psychedelic Business Spotlight – April 15