The Healing Power of Ayahuasca: An Ancient Medicine for Modern Times 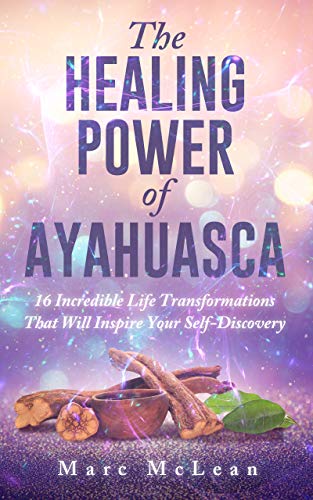 How one man’s journey into self-healing led to a story for all the world.

People say Mother Ayahuasca calls you when you’re ready. Her voice begins as an intuitive whisper. It reaches a crescendo until you finally take notice and come to her. And when you do, she does her magic and your life is changed forever.

That’s the way it happened for 34-year-old Marc McLean, he wrote in his book titled The Healing Power of Ayahuasca. It was March 2017, and he felt weighed down by the pressure of family angst and the anguish of yet another failed relationship. He was no longer the guy in control, the fixer of everyone’s problems. His life had spiraled to its lowest point and he felt hopeless.

There he was, sitting in his parents’ house, thumb pushing through Instagram posts on his cell phone, when he came upon a video by Wayne Dyer. McLean had been reading books by the renowned spiritual author and self-help guru in search of inner peace. He respected Dyer, so he paid close attention.

“He was singing the praises of ayahuasca,” McLean says from his home in Loch Lomond, Scotland. “Up until this point, I’d always thought ayahuasca was a drug people tripped on. So, for a spiritual guy like Wayne Dyer to be raving about it, this really caught my attention.”

Strangely, within a matter of hours, McLean came across another Instagram post about the hallucinogenic brew. This time, it was a quote from Dr. Gabor Maté, a physician specializing in childhood development and trauma, who was gushing about the “wonderful healing effects of this plant medicine.”

Was Mother Ayahuasca calling McLean? He’d never done psychedelics before so the notion was somewhat bizarre. But in the days that followed, there were more signs, more strange coincidences. He could no longer deny the desire that was building in him. Could ayahuasca help McLean release the blanket of negative energy that was dragging him down?

Ayahuasca is a brew made from the leaves of the Psychotriva viridis shrub and the stalks of the Banisteriopsis caapi vine. It contains the active ingredients DMT (dimethyltryptamine) and MAOI (monoamine oxidase inhibitor). When combined and consumed, these two ingredients create an altered state of awareness that can include hallucinations and a sense of euphoria. It’s during this experience that people say the healing begins. It may be an overwhelming or even painful experience. But ultimately, for most, it’s enormously healing.

For centuries, ayahuasca has been used in spiritual and religious ceremonies by Amazonian tribes. The practice continues within some religious communities in South and Central America. Ayahuasca is illegal in some countries, including the United States and McLean’s home country of Scotland. But ayahuasca ceremonies are held at retreats in other parts of the world where it is legal. In recent years, these rituals have become more and more sought after by tourists, mainly Westerners addled by the stresses of modernity, in search of a self-healing experience.

A former journalist, McLean began researching ayahuasca. But he wanted more. He wanted personal stories — testimonials from people who had participated in a ceremony. He wanted to see just how the mysterious brew changed their lives.

“Hours and hours of trawling the internet would deliver the odd individual story that I could relate to,” he writes. “I wanted more first-hand accounts because saying yes to this medicine was a big decision. I wanted more ‘before and after’ stories that would give me the confidence to venture into the unknown since this medicine [is] labeled an illegal, dangerous drug in my country.” When he felt convinced of his calling, he acted quickly to find a ceremony that would take him.

“Within a week, I was at an ayahuasca retreat in the Netherlands led by an amazing Dutch couple,” he says. “I was the sole participant at the retreat, and my journey took place in the Dutch couple’s countryside cottage.” There, he participated in two back-to-back ayahuasca ceremonies. The first, he says, was “wonderful and rejuvenating.” The second, “was easily the most difficult experience of my life — yet undoubtedly the most rewarding.

“I was shown clearly the broken relationship I’d had with myself since childhood, and purged decades worth of heavy negative energy from my body,” he recalls. “Scary yet beautiful at the same time.”

Telling the Stories of Ayahuasca

Upon returning to Scotland, McLean felt compelled to share his ayahuasca experience, but also the experiences of others who answered the call of Mother Ayahuasca. The reason? To provide a collection of real-life ayahuasca journeys in one place “Details of struggles people just like you are facing, and how ayahuasca helped them find answers, find healing, and ultimately find themselves,” he writes.

Reflecting back on that moment three years ago, McLean still feels passionate about the opportunity to share his ayahuasca journey and the journeys of so many others in his book, The Healing Power of Ayahuasca. “My first experience with ayahuasca was so profound that I had zero doubt there were countless individuals out there who had such a story to tell,” he says. “There might be one person reading their story today who might feel something click in their heart and be pulled toward the medicine themselves.

“That possibility puts a smile on my face.”

What McLean learned is that each person came to ayahuasca for different reasons — to overcome heroin addiction, eating disorders, childhood trauma. And their recovery was life-changing to say the least.

“Sounds like a fairytale,” he writes. “It doesn’t quite work out that way, though. In order to find those qualities of compassion, kindness, and love, it often requires working through the darkest aspects of your psyche. There are difficult encounters with your shadow self. Painful memories from childhood and past experiences must be processed so you can finally let them go.”

McLean’s ayahuasca experience not only helped him heal from childhood trauma, it opened his eyes to psychedelics in general. He has since participated in a total of seven ayahuasca ceremonies, returning to the retreat in Holland, as well as participating in a couple ceremonies high in the Sierra Nevada Mountains in Spain with about three dozen other guests.

The latter involved singing traditional songs and dancing throughout the evening. “The retreat organizers told us that the singing and dancing is all part of the healing and transforming heavy, negative energies into light and joy,” he says. “That is exactly what I experienced … and it’s impossible to put those nights into words.”

Upon returning from his first ceremony in Holland, McLean also tried psilocybin. “Psilocybin is nature’s medicine, and there’s little more powerful than taking mushrooms out in nature,” he says. “Obviously, I’m not advocating that everyone go out and take mushrooms while going on a walk in the woods, as set, setting, and intention are crucial, and psychedelics have to be taken responsibility.”

One thing he finds most rejuvenating is microdosing with psilocybin and walking in nature with a close friend. “It eradicates any creeping signs of depression. It has taken my creativity to new levels I didn’t think was possible. It even helps me process — in the most beautiful way — the grief of my father dying.”

This practice, he says, is far more effective than antidepressants, a drug consumed by about one million people in Scotland, “a jump of almost 50% in the past 10 years,” he says. “There needs to be a rethink of treatment and it needs to be centered on what’s staring us in the face. Given the huge promise that psilocybin is showing at psychedelics research centers here in the U.K. and the U.S., I hope it’s not too long before we see alternative health clinics offering psilocybin therapy to the people who need it most.”

McLean feels so strongly about the benefits of ayahuasca, psilocybin, and other plant-based medicines that he worked as media and communications manager with the global grassroots awareness campaign ThankYouPlantMedicine to help raise awareness about plant medicines, entheogens, and psychedelics. In August, he and friend Alan Wilson launched the YouTube channel Yourevolution, which showcases “remarkable people with amazing stories to share.” The lineup includes a documentary featuring a ayahuasca ceremony at the Amoraleza retreat in Spain.

Ayahuasca not only helped McLean get over personal anguish, it also created new opportunities in his life. “It has given me more wisdom and teachings than I could hope for in 10 lifetimes,” he says, his energy and enthusiasm still very much apparent in his words. “The medicine has flooded me with so much love that I really don’t need much else.”