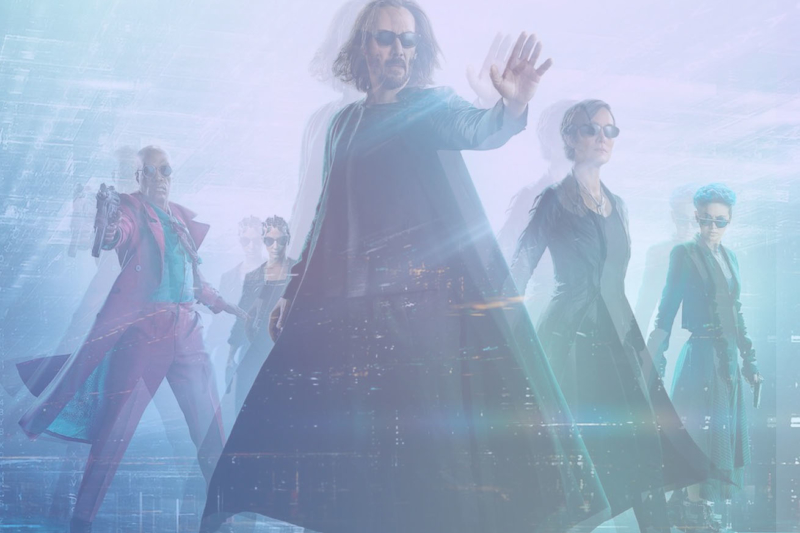 "The Matrix" was always an allegory for awakening to your full potential, and the fourth sequel creates the proper set and setting to dive even further through the looking glass.

The world let out a collective gasp in 1999 when a hacker named Neo (Keanu Reeves) discovered he’d been living inside a digital simulation designed to keep his brain occupied while machines feasted off his body’s energy. Shocking though The Matrix plot twist certainly was, the Wachowskis-directed franchise somehow grew even wilder with The Matrix Reloaded and The Matrix Revolutions sequels in 2003.

After an 18-year hiatus, Lana Wachowski, Reeves, and Carrie-Anne Moss have returned to melt an all-new generation of minds with The Matrix Resurrections, a film so trippy audiences might wonder if their popcorn is laced with mushrooms. From reality-bending flashbacks and guided spiritual journeys to the film’s real-life stars embracing plant medicine, here are five ways Resurrections is even more psychedelic than the original trilogy.

It’s debatable whether Lewis Carroll’s Alice in Wonderland is really about a bad trip, but that hasn’t stopped the Wachowskis from treating the story’s potion-drinking, mushroom-eating protagonist as literature’s first psychonaut. The Matrix contains several homages to young Alice and Resurrection plays up the angle even more.

Neo’s coworker (Priyanka Chopra) reads Carroll’s Through the Looking-Glass, his resistance ally Bugs (Jessica Henwick) sports a white rabbit tattoo, and his therapist (Neil Patrick Harris) possesses a Chesire-esque cat which upends Neo’s life on several occasions. Several characters also literally step through looking glasses in the film, with Neo himself nearly getting pulled into one.

Mirrors play a much bigger role in this installment. Not only do they serve as the doorway by which “Red-Pilled” humans must first escape the Matrix, they also double as portals Neo and his crewmates can use to bop around to different digital realities and quickly escape danger.

Additionally, mirrors offer Neo and Trinity (Moss) glimpses of their own distorted reflections which the sentient programs altered to make them harder to find.

The connections between mirrors and psychedelics are multi-faceted. Symbolically, they—like plant medicine—exist to transport consciousness from one reality to the next. More literally, they scare characters who look into them, echoing a common refrain from real-life psychedelic users experiencing a “bad trip.”

The red pill that Morpheus (Laurence Fishburne) offers Neo in The Matrix has long been seen as a metaphor for a consciousness-expanding, guided psychedelic journey. The analogy grows more complicated but no less trippy in Resurrections when Neo rejects the red pill at first, thanks in part to counsel he received from his therapist (Neil Patrick Harris) treating him for anxiety and attempted suicide.

Resurrections considers the idea that Keanu’s messiah character carries the weight of the world on his shoulders, which takes a mental and spiritual toll. But what’s the solution?

Harris’s character the Analyst—later revealed to be a villain—has Neo believe it’s conventional therapy. The Analyst and his cat, the literal embodiment of déjà vu, caution Neo against free-thinking and giving in to impulses.

Morpheus, however, (now played by Yahya Abdul-Mateen II) urges Neo to free his mind with the red pill and join him on a (guided) hallucination and flashback-filled healing journey. In fact, he even mentions the importance of set and setting in the process. Neo eventually goes red, of course, leading to the start of his psychedelic journey.

If the original trilogy seemed trippy for inventing the slow-motion, 360-degree action effect “bullet time,” then the Analyst’s new abilities in Resurrection will really bake your noodle.

In The Matrix, Neo got out of jams by slowing down time around him to dodge bullets. In Resurrection, it’s Harris’s character controls the clock and can slow down the entire world. This leads to one far-out scene where he fires a bullet at Trinity and delivers like a five-minute monologue while the bullet spins slowly and Neo watches on helplessly.

The culture around psychedelics has evolved significantly since The Matrix debuted a few decades back, and the stigma is finally evaporating, thanks to evolving legislation, promising research, and even Hollywood celebrities coming clean about their past experiences.

Keanu, for example, once praised psilocybin for giving him insight into his own mind. “Sitting in a field, hearing and feeling and looking at nature, seeing what comes out of oneself. Having parts of the psyche revealed. [Psychedelics have] certainly given me the sensation of an enrichening aspect,” he told Rolling Stone in 2000.

More recently, Jada Pinkett Smith dedicated an episode of her show “Red Table Talk” to a discussion about psychedelic healing. The actress (who reprises the role of Niobe in Resurrections) told viewers she struggled with “crippling depression” for 10 years before overcoming it with mushroom therapy. “The thing about plant medicine is not only does it help you feel better but it helps you solve the problems of how you got there in the first place,” Pinkett Smith said.