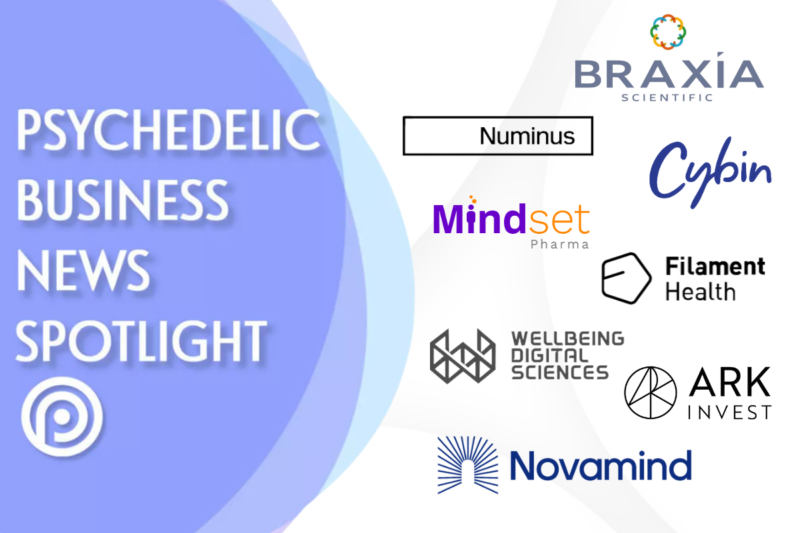 That changed on June 12th, when, in response to a Twitter inquiry asking when the deep dive was coming, ARK research associate Pierce Jamieson responded, “It’s coming, be patient.”

This will likely excite retail investors who are fans of both psychedelic stocks and ARK Invest. Despite ARKK falling nearly 70% in the last year, there are still armies of retail investors who have bought into Cathie Woods’ vision of investing in the technologies of the future. While we don’t know when this deep dive is coming, it is good news to hear the project is still being worked on by ARK.

The combined company —continuing to operate under the Numinus banner— will have an annual revenue of C$11.9 million, calculated from the trailing four quarters. Presumably, this is a starting point and revenue will continue to rise going forward. Of course, Numinus will still be running a large deficit.

Mindset Pharma (CSE: MSET, FSE: 9DF, OTCQB: MSSTF) has received a “Notice of Allowance” from the United States Patent and Trademark Office for their Family #1 of next-generation psychedelics.

Family #1 consists of second-generation psilocybin molecules, which Mindset says have the potential to be safer, stronger, and more cost-effective than the original. The lead molecule in Family #1, MSP-1014, is expected to enter a Phase 1 clinical trial this year, with the eventual goal of treating depression.

A “Notice of Allowance” is granted when the patent office believes that a patent application qualifies for a patent. However, there is still some paperwork required before it is officially granted.

This week, Cybin (NEO: CYBN, NYSE: CYBN) announced that they had “received Institutional Review Board (“IRB”) approval to begin the first-in-human Phase 1/2a clinical trial evaluating CYB003.” CYB003 is Cybin’s proprietary, next-generation psilocybin. Among other improvements over the original that Cybin claims, CYB003 is said to have a shorter duration of effect and be safer.

Commenting on the news, Doug Drysdale, Chief Executive Officer of Cybin, said “IRB approval of our trial protocol is a significant regulatory milestone for CYB003 as it leads us one step closer to potentially providing this important treatment option to people in need. The team has worked tirelessly to move this program into the clinic, and we look forward to initiating the study in mid-2022 and further supporting our mission to develop psychedelics into therapeutics.”

Given the net loss for the quarter, compared to the amount of cash Wellbeing has on hand, it appears the company is in a tough spot. Unfortunately, as their market cap is only C$4.13 million, raising money will also be difficult. If Wellbeing wants to continue spending at the same rate, they will have to get creative in how they raise cash.

Filament Health (OTCQB: FLHLF, NEO: FH, FSE: 7QS) has joined the growing list of companies that have treated at least one patient in Canada through the Special Access Program (SAP).

The SAP program is meant to provide patients with access to a medicine that is currently not available in Canada, when the patient has already tried multiple other treatments without success. Already, companies such as Numinus and ATMA have been given approval to use psilocybin on patients with severe depression through the SAP.

Interestingly, Filament says that their SAP patient has been dosed with “one of Filament’s drug candidates.” This is almost certainly PEX010, their furthest progressed drug candidate. PEX010 is a naturally derived version of psilocybin.

To round out this week’s psychedelic business news, Braxia Scientific (CSE: BRAX, OTC: BRAXF, FWB: 4960) announced that the Company has opened its fifth psychedelic medicines clinic in Canada. The clinic, in Kitchener-Waterloo, will primarily treat depression patients with ketamine-assisted therapy. They may also be able to treat a limited number of patients with psilocybin-therapy, either through one of their clinical trials, or perhaps through the SAP. Eventually, when MDMA and psilocybin therapies are legalized, the clinics will likely also offer these treatments.

On top of the new clinic, Braxia will also be adding capacity at its new flagship center in Toronto and its clinic in Ottawa.

“Today’s announcement is the first of what we intend to be a series of growth developments and acquisitions to our clinical network,” said Braxia CEO Dr. Roger McIntyre. “Further plans are in place for the expansion of Braxia Health clinics in Toronto and Ottawa, Ont., to better serve the growing unmet need in our Canadian communities.”

Whether trying psychedelics recreationally or clinically, you may wonder: just how do hallucinogens work? Here's the guide to what to expect.
Music as Medicine – Music’s Role in Mental Health & Psychedelic...