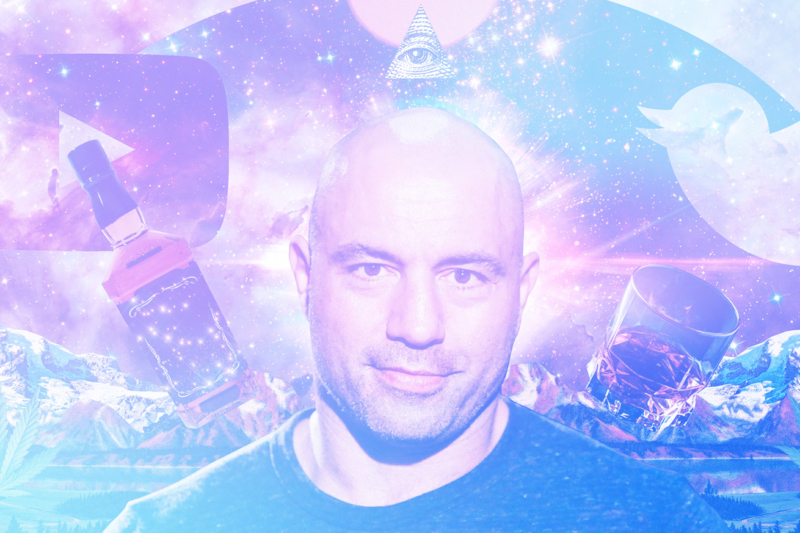 If you’ve spent any time Googling psychedelics or lurking in other internet spaces where psychonauts discuss the wonders and hazards of hallucinogens, odds are you’re familiar with Joe Rogan: American comedian, mixed martial artist, podcast host, DMT-enthusiast, and one of the most consumed media products on the planet.

His podcast The Joe Rogan Experience is a mishmash of meandering musings often escalated by whiskey and weed. Since launching in 2009, Rogan has worked his way into the zeitgeist — to the disgust of some and the exhilaration of others. On his show, he makes market-exploding recommendations for CBD products, dietary supplements, and even nonfiction books. He also discusses everything from quantum physics to cage-fighting and, presumably why you’re reading, psychedelics.

In recent years, he’s become a divisive name. Though Rogan’s podcast began as pure entertainment, politics and public health are frequent discussion topics. He’s been seen chumming it up with conspiracy king Alex Jones, while also vocalizing support for far-left politician Bernie Sanders in the past. He has welcomed guests across the political and idealogical spectrum, hosting in-depth, hours-long conversations with experts in varied fields of interest, such as celebrated author Michael Pollan and mycologist Paul Stamets.

The Rogan discourse of praise and criticism will likely go on in circles forever, but Psychedelic Spotlight and many of our readers are particularly interested in his conversations around hallucinogens, so with that being said, let’s go back and recount the top five Joe Rogan episodes to watch if you love unbounded dialogue surrounding psychedelics.

Since its publication, Michael Pollan’s book How to Change Your Mind: What the New Science of Psychedelics Teaches Us About Consciousness, Dying, Addiction, Depression, and Transcendence has acted as a gateway for many, piquing national interest in psychedelics.

Pollan appeared on The Joe Rogan Experience in the past, but his most recent July stint to discuss his new publication, Your Mind On Plants, is not only a captivating conversation about psychedelics but about the creative process at large. In the episode, Rogan and Pollan bounce personal experiences with psilocybin, LSD, DMT, and mescaline back and forth. Rogan’s rambling format gives writers the rare space to discuss their craft in-depth. An interesting revelation from this episode is that Pollan, who many view as an expert on psychedelics, actually attributes his success to ignorance, stating, “I think readers don’t like experts. I think they want someone to take them on a journey, and my education becomes the story that you follow; I always start out as an idiot in my writing.”

In this iconic episode, Rogan levels with former boxing champ Mike Tyson. They cover it all: his past, his fears, sports, and his psychedelic awakening. Tyson freely shares, “then, as I got older, I tried acid.” Rogan inquires: “how old were you when you did acid?” to which Tyson replies, “probably 11.” The conversation is memorable to many because it covers how psychedelics helped to do what they do best: humble Tyson’s ego. “I smoked this medicine—drug—whatever you want to call it, and I’ve never been the same,” Tyson states. “I look at life differently. I look at people differently.” “That’s what it felt like to me, too,” Rogan adds, “You stop existing.”

Imagine a garden gnome in an extremely practical hat who was gifted to the world to offer wisdom and awe: that’s Paul Stamets. It’s hard to get Joe Rogan to just sit back and listen, but Stamets’ breezy way of making big concepts easily digestible and intriguing does the trick. When Joe says, “[mushrooms] are the architects of their ecosystem,” Stamets stuns him with comebacks like “they are the architects of our existence.”

A successful mycologist (an expert on mushrooms) Stamets breathes new life into the cliche “there’s fungus among us.” In addition, he is a huge advocate of bioremediation and medicinal fungi. If you want the JRE interview that is top to bottom about psilocybin, this is the one. Rogan lets Stamets orate why he thinks “psilocybin should be looked upon as a nootropic vitamin,” and Stamets even relays how his first psychedelic mushroom experience cured his stutter. All in all, a profound discussion that you can revisit time and time again.

Dennis McKenna, brother to the late ethnobotanist, mystic, and framer of The Stoned Ape Theory Terence McKenna, offers many diverting sound bites in this episode. He drops wisdom such as, “…one of our problems I feel as a species is we’re extremely clever, but we’re not wise” and “because we can do it, should we do it?”

McKenna and Rogan also get deep about DMT. “DMT is extremely common in nature…I say nature is drenched in DMT. From the animal level to the plant level to fungi level, you find these things everywhere”, Dennis McKenna says. Joe then counters in late- 2010’s-sympathetic-Rogan style, “It really is a shame that we need an illness to treat before you allow someone to have this potentially mind-expanding experience… it’s almost like not allowing people to take vitamins unless they’re really sick”.

Bonus: This episode also brought “are we living in a simulation?” into the national lexicon.

For psychonauts who have trouble sleeping, this episode is an absolute must. Matthew Walker wrote the book on sleep — and, no, that isn’t an overstatement. Walker, a Professor of Neuroscience and Psychology at the University of California, Berkeley, and Founder and Director of the Center for Human Sleep Science, is one of the world’s leading experts when it comes to sleeping patterns. In this episode, Walker gets candid with Rogan about dreams, brain chemistry, and — of course — psychedelics.

Whether trying psychedelics recreationally or clinically, you may wonder: just how do hallucinogens work? Here's the guide to what to expect.
Interview With Steven Huang, DEI Consultant at MAPS and Numinus